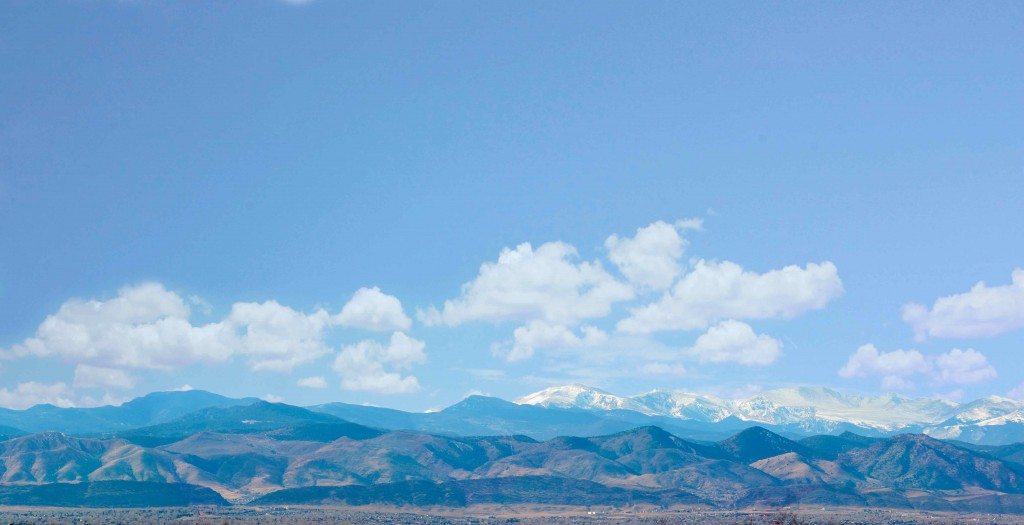 A lake rests at the base of a mountain range untouched by man, with rocks placed so perfectly along the shore that one cannot fathom how Mother Nature could create such an exquisite foreground for the setting sun.

That is what one might imagine when they think of Colorado — to be able to watch the sun set over the mountaintops and get lost in the colors splashed across the sky fills the mind with child-like wonder.

The Colorado skyline is something you are not going to find anywhere else. Look to the west and you will see the gorgeous mountains. Wait until midnight, look up, and you will see so many twinkling stars, you would be sure you were in a snow globe.

Finding what calls to you, finding that special something that makes Colorado home, is a beautiful thing. Even better is the opportunity to share your experiences and allow others the chance to explore the state.

The Colorado Front Range is any area in eastern Colorado that is home to more than 80 percent of the state’s population. It encompasses national parks, concert venues, exceptional views and the incomparable Colorado State University.

Out-of-state and international trips are made here, and those who call the Front Range home know all too well how easy it is to fall in love with everything uniquely Colorado.

In 2014, it was estimated that more than 5 million people live in Colorado, according to the United States Census Bureau. In addition, the state catered to 60 million tourists in 2012, according to the Denver Post.

Go out, explore all that Colorado has to offer, make your own memories, and, better yet, share them to allow others the opportunity to do the same.

The Cache la Poudre River gets its name from the French Canadian trappers who hid their gunpowder there in the 1800s. Its headwaters in Rocky Mountain National Park, the river eventually winds its way to Fort Collins. From its starting point down to the South Platte River, the river drops 7,000 feet, according to VisitFortCollins.com.

For many local residents, the river is part of the culture here. Tubing down the Poudre is a hobby many do in the summer and fall semesters, along with rafting and fishing. Visiting the Poudre should be something on every Ram’s to-do list.

The unique thing about Old Town is that the designer of Disneyland grew up in Fort Collins and used Old Town as his inspiration to create Main Street in the theme park.

Our town alone offers a variety of activities, from taking a stroll to seeing a concert in Old Town to hiking Horsetooth.

“There’s always lots of cool things to see up at Horsetooth Reservoir,” said Asia Zabala, a freshman business major. “I really liked hiking Horsetooth Falls. I liked the actual waterfall because it was really pretty and it seemed like a really cool, hidden place.”

Two mini-lakes surrounded by a sea of trees is the view you will get if you hike one of the many trails in this quintessential Colorado destination.

Drive two hours west of Fort Collins and you arrive at CSU’s Mountain Campus, formerly known as Pingree Park, a gorgeous region in the high valley of the Rocky Mountains that is a staple of the Warner College of Natural Resources at CSU. Situated at 9,000 feet, The Mountain Campus is a destination everyone should explore.

With Rocky Mountain National Park at its back door, Estes Park is a big tourist destination on the Front Range.

Over 3 million people visit Rocky Mountain National Park annually, with many using Estes Park as their base. The main part of town is sprawling with picture-snapping out-of-staters and enough T-shirt and candy stores to satisfy the tourists.

For those who call Estes home, however, the downtown area does not interest them, as rock climbing, hiking and other adventures await.

“My favorite thing is the mountains, the scenery and just being surrounded by them and having them at your back door was cool,” said Alexander Fraser, an undeclared freshman.

Longs Peak is a prominent fourteener that rises high above the western edge of the Great Plains. Many adventure seekers attempt to conquer Longs once the snow has thawed. The mountain offers various hiking trails and climbing routes at different difficulties.

It is located in Rocky Mountain National Park, and it is the highest point in Boulder County and the Park. Mills Glacier is the last remaining glacier on the mountain, just above Chasm Lake at the base of the eastern face.

Arguably the best thing about Boulder besides the proximity to the mountains, is Pearl Street Mall. The city is also close to Rocky Mountain National Park.

“My favorite memories are spending all day at the Boulder Creek tubing and rope swinging,” said Tyler Williams, a junior natural recourses major.

Boulder has had a long-standing rivalry with Fort Collins, which comes to light every year at the Rocky Mountain Showdown. This annual football game, held at Sports Authority Stadium, gives Rams a chance to show their school spirit.

Winter Park, a town located in the Rocky Mountains just off Highway 40, was destined to be a staple for adventure seekers across Colorado. The town offers everything from mountain biking in the summer to “shredding the gnar” in the winter.

“Skiing, hiking, biking and running are all things I have done while in Colorado,” said Cara Dunkelman, a senior psychology and criminal justice major.

A city southwest of Denver, Golden has more going on than you might think. In 1999, the city established the Golden Public Art partnership, which allows for art to be publicly displayed that celebrates the community’s heritage and environment, according to cityofgolden.net.

In addition to its arts culture, Golden has a history with the bicycling community and is a part of the USA Pro Cycling Challenge. Who would have thought that a city tucked in between two mountains could offer so much expression and excitement?

Denver is the Mile High City and home of the Broncos. This city is teeming with people and excitement. Take 16th Street Mall, sprinkle in street performers, shopping and a university campus and you are sure to make some memories.

For those who call the Front Range home, there is something even more special confined within the city streets.

“Piccolo in Denver is a diamond in the rough,” said Julie Hopko, a senior health and exercise major. “It is an Italian-Mexican restaurant where you can get anything from burritos to some of the best pizza in the world. Don’t forget the fabulous cannolis or sopapillas for dessert.”

Cherry Creek may be best known for its lavish shopping center, which boasts such names as Burberry and Louis Vuitton. If the shopping bags are weighing a little too heavy on your arms, go ahead and take a seat at one of the many dining areas.

Aurora might have more to do and explore than you think. It is home to Arapahoe County Fairgrounds and the historic Aurora Fox Arts Center. In addition, Aurora hosts a variety of community events throughout the year.

Go Punkin Chunkin during Aurora’s annual fall festival, where you can compete in a pumpkin launching completion.

“The diversity there is just so cherished and encouraged,” said Casey Giles, a junior political science and economics major. “At least, in the areas I got to live, I got to experience what it’s like to be in a melting pot of different people and learned a lot about acceptance.”

Located in Colorado Springs, Garden of the Gods is less intimidating than it might sound. This historic geologic wonder is a favorite to many, and the rock formations here seem to defy gravity.

If rocks aren’t your thing, you can always look to Colorado Springs for its year-round calendar full of festivals. Among these is an annual hot air balloon festival usually held Labor Day weekend. The sweeping views one can experience from hundreds of feet up is a special memory hundreds participate in each year.

Conveniently located in the heart of Colorado, Pike National Forest is one of the most well-known and popular national forests, according to ForestCamping.com.

According to the Forest Service, Pike is part of the Collegiate Peak Wilderness, which is home to eight fourteeners. Many adventure seekers look to fourteeners as a challenge to conquer, and for that and many other reasons, Pike National Forest gets a lot of attention year-round.

Fountain is the classic small town just a short distance from an exciting city. A suburb of Colorado Springs, Fountain is a family place with stunning views of Pikes Peak and the Colorado Front Range.

According to the Census Bureau, Fountain is most representative of America’s composition, based on race, income and various other factors. The area, like many places along the Colorado Front Range, offers a variety of recreational opportunities.

“In Fountain, my dad and I won a bass fishing tournament together and that was pretty cool,” said Tyler Hassler, a junior fisheries biology major.