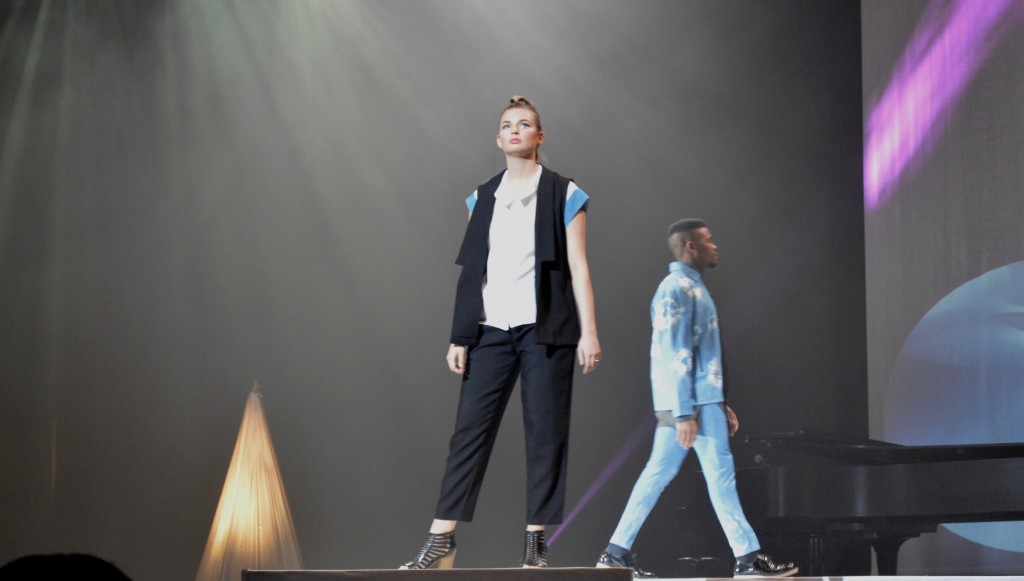 The students of the Design and Merchandising program at Colorado State University put together a riveting and consequential fashion show on Friday, April 1, 2016 at the Fort Collins Lincoln Center of the Arts.

The clothing was influenced by modern, vintage, and abstract designs that are currently popular all over the world. Not only were the clothes and designs hard to look away from, but the stage itself was far from ordinary.

The stage consisted of a very minimalist look; however it was a double sided stage so the models would walk in a circle on the stage, behind a see through sheet in which you could see them, then back out to the other side so it would ensure both sides of the audience would see the look.

It was mesmerizing to see the models behind the sheet at the back of the stage because some would dance around and this added a dance theory concept incorporated into the catwalk.

It was far from a simple runway that traditionally parts symmetrically in the middle of the audience.

Mackenzie Miller, was among one of the committee members who responsible for set design.

“For my team we planned out the design on the stage, lighting, the color of the stage and the loop,” Miller said.

Miller’s team was also responsible for adding the performance of pianist and vocals by Logan Smith. Smith would entertain the audience in between collection changes and intermission in order to keep the show alive and set the tone for what was to come.

“I would be nothing without my team, I couldn’t have accomplished this without the class or my group for the stage design; I would have not done it alone,” she said.

Not only was the show a success because of the talented designers, the directors and committee chair contributions, but the publicity had to be strategic in order to properly get the word out about this fabulous event.

Sarah Peeler, chair of promotions and publicity, strived to promote the show to the CSU student body, Fort Collins community, and the Colorado fashion community as a whole. Her tactics certainly were successful on account almost every seat was full in the auditorium.

“I especially loved looking out into the audience tonight and feeling that anticipation and energy,” she said. “The show came together so well because everyone was so invested and felt a connection to the designs and the inventiveness.”

“I would be nothing without my team, I couldn’t have accomplished this without the class or my group for the stage design; I would have not done it alone.” — Mackenzie Miller, committee member

Continuing the conversation of the inventiveness, the designs did not shy away from complexity and simplicity as well as a reinvention of something that fashionistas from different eras embraced such as yellow bell bottoms with yellow pleated trim, designed by Madeline Cook.

In terms of diversification, toddlers and children’s looks were created by Chelsea Beamer and Vanessa Macarenas and modeled by child model volunteers.

One particular collection, by Khristian Gilham was something that stood out due it’s modernity and lustrous black fabric with nude undertones.

“I was inspired by many different things; including film noir, a genre of film from the 1940s-50s, having very stylized clothing and strong scheming women- often the villains,” Gilham said.

Her goal was to achieve a classic look by utilizing the black look with heavy fabrics such as acrylic coats, tan faux leather, and a polyester blend for the dress. Gilham wanted to make a “wearable art costume design,” by highlighting the female silhouette, but still maintaining a hard look.

Gilham is a senior as this is her last year at CSU and she will graduate in May. This collection referred to as, “K.YNEZ” won Most Marketable at the show by the panel of guest judges.

“I was very excited to see all my looks walk together and the models were exquisite,” Gilham said. Needless to say, Gilham has much to look forward to in her fashion design career.

She plans to travel after college to Europe to absorb the culture and hopefully while she is there she will be inspired enough to design some one of a kind looks that will take forever to reach us here in the U.S. Regardless, Gilham’s talents and visions will cease to be on mute.

“These people will be the next generation of designers, we are so lucky to learn and be surrounded by them.” Sarah Peeler, chair of promotions and publicity

Among the other designers that also won awards, Rachel Hartman, who is abroad in Spain this semester created an elegant, red carpet worthy dress that won the Outstanding Designer Award.

The dress is referred to as “Cloud Tones” (modeled by Lia McLaughlin) is a remarkable dress that was immediately applauded by the audience due to it’s cape attachment, which is very popular currently among celebs such as Gwyneth Paltrow and Kate Hudson in the last year, but also for the way it was worn on the model.

The CSU Design and Merchandising department and students managed to cultivate a highly creative show filled with the utmost talent between the designer, models, and everyone behind the scene making it all possible.

“We have a world class design program here at CSU, it’s the best you will find between either of the coasts,” Peeler said. “These people will be the next generation of designers, we are so lucky to learn and be surrounded by them.”

The visionary talents here in Fort Collins defines and reinforces what it means to create art. It is more than the fabric and the sewing machine; it is the art that is worn on our bodies to express, individualize, and be remembered as a staple of fashion’s history and future.