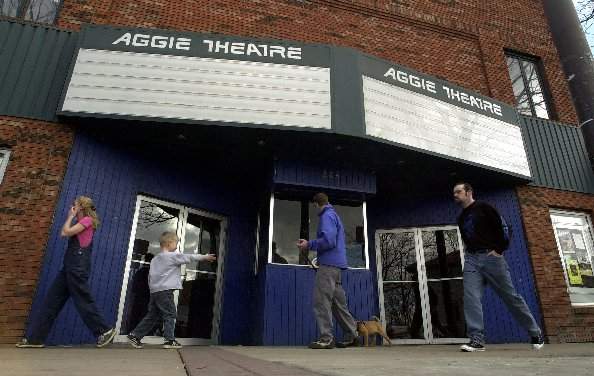 As I walked through the doors of the Aggie Theatre, my heart beat so hard I thought it might tear its way through the chest of my black “Bitch Don’t Kill My Vibe” crop top. The pounding music, the cheers of the crowd, that “new car” smell as if something has been freshly cleaned, mixed with a whiff of whiskey that could only belong to a concert hall. I could practically taste the exhilaration in the air. It was dark in the theater, except for the purple and blue laser lights slicing through the haziness coming off the stage.

We all have that one song you just can’t stop singing because it’s constantly stuck in your head. The one you immediately put on after getting into your car. The one you always request at parties or bars. For me, that song is “All Night Longer” by Sammy Adams. So, when I found out he was coming to Fort Collins to perform at the Aggie on Sept. 22 with Huey Mack, I had to buy at ticket.

When I asked around to see who else might be attending the hip-hop concert, I heard a similar response from a few people: “That’ll be a throwback!”

Other than a few hit songs such as “Driving Me Crazy” and “L.A. Story,” I had never really listened to Sammy Adams or Huey Mack, and as I thought about it, I realized those songs were, in fact, back from 2013.

I made a playlist of the artists’ top tracks, both old and new, and refused to listen to anything except that for the three days leading up to the concert. Slowly, I fell irrevocably in love with the music.

I was front and center as Mack walked out onto the stage dressed in all black. The shrieks from the audience were deafening. In a totally unexpected act that left me breathless, he walked straight towards me. He stood there above the crowd, letting us all grasp desperately for his hand, even just his fingertips, and smiled right at me. I felt weightless.

Mack wasn’t the type to simply walk by and smack the audience’s hands like he was giving them a high five, either. He would crouch down and hold our hands while he sang to us, as if he actually saw us. We were more than just fans in the throng of people in those moments.

He knew how to work a crowd, that was for sure.

Both Mack and Adams’ music is just fun. I don’t think anyone stopped dancing for more than a few seconds during either of their sets. The rhythm to their songs is energetic and upbeat, while their lyrics focus on topics such as partying, drinking, and girls. It’s clear that their work centers around a college fanbase, and what more could you ask for from a college crowd than what Fort Collins provides?

Mack popped a bottle of champagne on us as he sang some of his most popular songs such as “Favorite Song” and “Cruella de Vil.” He slowed down the vibe at one point and got a little more personal when he rapped about one of his past relationships – a remix to the widely recognized Chainsmokers song “Closer.” Mack had the entire crowd shouting the words. He sang “Take It All Back” for the last song of his set, which is a major hit from his debut album released in 2013, “Pretending Perfection.”

Adams commanded the stage shortly after, dressed in rolled up jeans, a baggy white t-shirt sporting the name of his tour, and a denim jacket, true to what he deems himself a “Boston boy,” and he was wild.

I’ve never seen a performer so animated. He jumped, he spun, he slid around the stage and, like any fangirl would, we ate it up. The concert was basically one massive party as we jumped up and down, pumping our fists in the air in unison.

Adams sang some of his classic songs like “I Hate College” while also showing off music from his new album, with songs titled, “We Are the Ones” and my personal favorite, “Helluva.”

He tapped into a more emotional side, as well, when he sang a song he had written about his dad suffering through illness called “Long Way.”

Adams then introduced some of his work as “hip-hop dubstep,” something so unique and bass-heavy that I was shocked it hadn’t yet become a phenomenon. One such example is his track “Bass Head,” where he pulls from the infamous DJ Bassnectar’s song and remixes it with his own rap lyrics.

Naturally, Sammy finished up with “All Night Longer.”

When the show was over, the crowd refused to move. I joined in the chanting of “L.A. Story” as we attempted to persuade Adams to come back out for an encore.

We didn’t want it to end because, in those three hours, we were all part of something. Something much bigger than ourselves, something that nobody could possibly understand unless they had been there to witness it. But that’s what music is all about.

Earlier this year, Adams’ new album “The Long Way” was released and is now available on iTunes, along with Mack’s album “The Longest Year of My Life.”