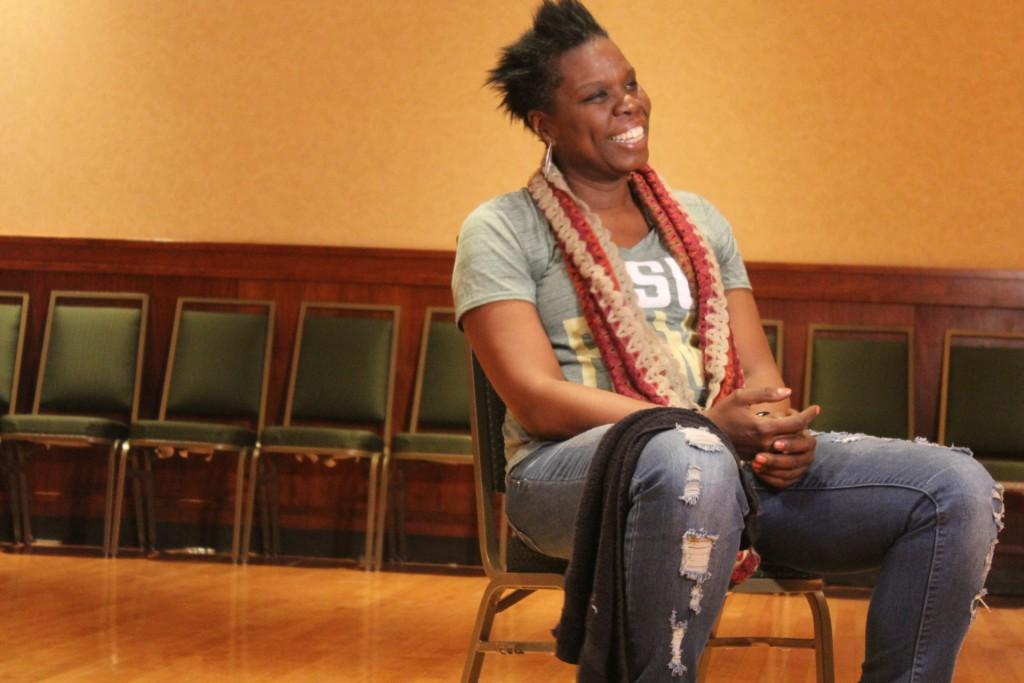 “This ain’t gon’ be sh*t like SNL!” Leslie Jones proclaimed as she took the stage at the Lory Student Center Ballroom on Saturday, March 26 to perform at CSU’s Comedy Works. Decked out in a CSU Rams t-shirt, light wash jeans and whiter-than-white sneakers, Jones bounced on stage with the biggest grin on her face.

Jones was born in Memphis, Tennessee and moved to Los Angeles after her father got a job working as an engineer at Stevie Wonder’s radio station. While in California, Jones found a passion for basketball, which eventually got her a scholarship to Chapman University. Her coach then received a job offer to work for the CSU women’s basketball team and asked Jones to follow him there. She happily obliged.

However, Jones’ career at CSU was short lived. The comedian was redshirted her first year and didn’t step foot on the court. Also, she focused more on writing jokes than studying, which earned her a 1.7 GPA. Becoming more confident in her comedy skills, Jones participated in a comedy contest that landed her the “Funniest Person on Campus” award. With such a low GPA, Jones wasn’t able to keep her scholarship and moved back to L.A. to pursue her comedic dreams.

Fast forward almost 30 years, and Jones has become a successful comedian. Her credits include writing for “Def Comedy Jam” and “Saturday Night Live” and acting in “Trainwreck,” “SNL” and “Workaholics.” In July, you can catch Jones on the big screen in the reboot of “Ghostbusters.” Jones has now come full circle. Instead of being unable to afford CSU’s tuition, she is now being paid to crack jokes on the campus.

Opening act Erik Marino welcomed Jones to the stage saying that things were “about to get a whole lot better.” With an hour of time to kill, Jones rolled out the jokes and packed the punches. Topics included sex, drugs, breakups, embracing your craziness and being your own person.

Jones explained to the audience about a “f*cked-up relationship” she once had. “Basically, it was a booty call I took too seriously.” She went on to say that the man broke up with her at a dog park while wearing Crocs and sporting a pony tail. “You’re breaking up with me wearing Crocs and a ponytail?” Jones screamed into the mic while audience members cackled wildly.

Another bit that got the audience rolling was Jones explaining how much she hates the dog rescue commercials. Singing “In the Arms of an Angel” by Sarah McLachlan, Jones explained how we all feel when seeing those commercials.

“They try to make me think it’s my fault! That I need to do something. What really makes me mad is that the camera crew is right there! Help them! Put the camera down and help them!”

Jones then interacted with the audience, maneuvering between rows and aisles to find audience members to ask questions and pick on, as comedians do. Sitting in the second row, a family of four found themselves the butt of many jokes. Jones then found out that a 21-year-old audience member wasn’t graduating on time and made sure the girl knew to get her priorities straight. While walking through the audience, Jones spotted an attendee studying.

“Are you studying?” she asked surprised. “Hold on,” Jones said as she marched back to the 21-year-old student to serve her some serious stank eye.

Jones connected with the audience so much that it got a little sexual. She gave a lap dance to a member of the crowd, laid across the laps of three students and let them spank her and she even made a wife get out of her seat so she could sit with her husband.

The closing of the standup consisted of Jones empowering the young women in the room, telling them to accept their craziness. “Raise your fists in the air and own being a crazy bitch!” she commanded while pumping her fist in the air.

“We (women) are gangsters!” Jones stated, talking about women being able to grow a human being inside of their body. “We are gangsters for having babies and taking dick!”

Jones’ energy was palpable in the ballroom — it was electric and buzzing with emotion. The audience responded to her jokes and hung to her every word. As she bounced around the stage and room, Jones made sure to make eye contact with every audience member, even if it was a bit uncomfortable. She was quick, ludicrous and relatable.

“Don’t let no man tell you who you are,” Jones said. “Punch them in the face if they do.”