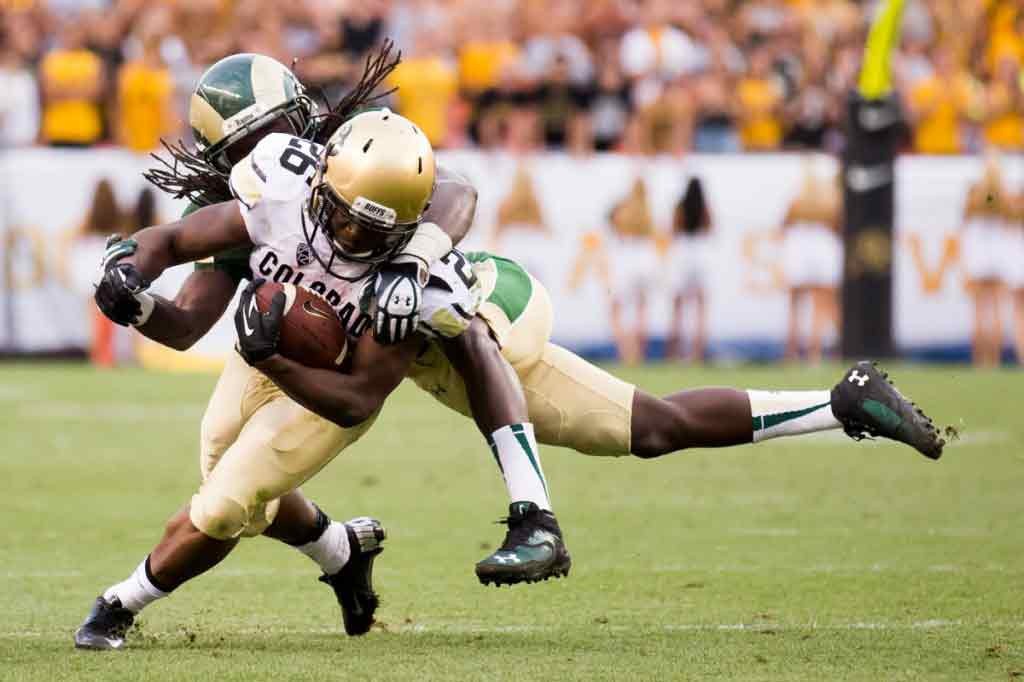 Adrenaline. The fans, the noise, the beer, the players, the sheer amount of people, the thrill of competition. But, none of these can surpass one element of adrenaline at a sporting event: rivalry.

Colorado universities have a long history of rivalries, especially in football. In the early 1900s, the universities in the state included Colorado A&M (CSU didn’t become Colorado State University until 1957), Colorado School of Mines, Colorado University (Boulder) and University of Denver.

These four schools mingled in each other’s history as the students and athletes of the time created rivalries that would last for the next century.

The rivalry that would lead to every Ram statue on CSU’s campus proudly facing their rear ends toward Boulder was initiated by Colorado A&M when the Aggies challenged the Buffs to a football game on Feb. 10, 1893, in Fort Collins.

The game remains one of the hardest losses over the century the two have been football rivals, with the Buffs destroying the Aggies 70-6.

Justice would come about 20 years later, in 1912. Boulder was on a 21-game winning streak, the CU school record to this day. Colorado A&M rightfully ended it with a 21-0 win in Fort Collins. Today, CU holds a 62-22-2 series lead, but CSU has won two of the past three meets.

In the 2014 season, CSU won the matchup 31-17 on Aug. 29, when CSU scored three touchdowns in the second half and the defense shut down Colorado’s passing game to hold them to 17 points.

However, Rick George, athletic director for CU, is trying to avoid playing CSU after 2020, when the universities’ contract ends. George also told the Denver Post that playing the Rocky Mountain Showdown in Denver is “dead.”

“I’m not sure where our series with CSU goes after that [the current contract] either,” George told the Denver Post. “Today, we would not extend our agreement to play past 2020.”

Even if George manages to end the Rocky Mountain Showdown in 2020, the CSU-CU sports rivalry will continue through basketball and volleyball.

In three major games against CU this year (football, basketball and volleyball), CSU won against their rival.

Colorado School of Mines vs. University of Denver

Colorado School of Mines and the University of Denver may not be at each other’s throats anymore, but, in its day, this may have been the most vicious rivalry in the state.

At 4:15 a.m. on Nov. 6, 1919, a series of huge dynamite explosions shattered Templin Hall on DU’s campus. The blasts were so powerful that residents in Templin Hall thought there was an earthquake.

The explosions blew out 100 windows in DU’s University Hall, the Iliff School of Theology, Carnegie Library and Memorial Chapel.

While it was not proven, Mines students were blamed because they were famous for dropping sticks of dynamite for fun throughout Golden. Not to mention the signs that were found reading, “Get DU” and “Give ‘Em Hell, Mines.”

DU students retaliated with a plan to drive up to the white “M” on Mount Zion that overlooks Mines and paint it red. However, Mines students caught them after painting only a small portion of the M.

Mines students barricaded the road down the mountain, and both Denver papers reported that shots were fired, though they were said to be blanks.

According to the DU magazine, after being captured, the DU students had their heads shaved and “M”s were etched onto their scalps with silver nitrate, a caustic chemical that takes months to wear off. Afterwards, the captured students were kept in Mines’ fraternity houses under heavy guard, according to The Denver Post at the time.

After a football game between the two that ended in a tie, Colorado Gov. Oliver Shoup ordered the intercollegiate war to end. The intense rivalry eventually fizzled out, and today, the CSU vs. CU competition is the reigning rivalry in the state.

The Bronze Boot is the most notable symbol of this historic rivalry. Each year, CSU and University of Wyoming battle it out on the football field to bring the bronze trophy back to their respective states. The Border War started in 1899, but the Bronze Boot was not introduced until 1968.

The boot belonged to a Vietnam War veteran. Capt. Dan Romero was a CSU Army ROTC graduate who wore the boot in combat in 1966-1967. Today, it continues to act as a symbol for the ROTC battalions of each school.

While this rivalry originated with football, in recent years, the rivalry has gained momentum in men’s basketball. In 2013, the men’s basketball Border War was one of four sellouts, and in 2011-2012, this was the only crowd to reach Moby’s capacity, according to The Coloradoan.

Wyoming students were featured in USA Today after they chanted “alcoholic” at men’s basketball head coach Larry Eustachy in 2013. Eustachy had been sober for 10 years at the time of the chants, but libelous fliers were distributed at Wyoming before the game. CSU won the game 78-56.