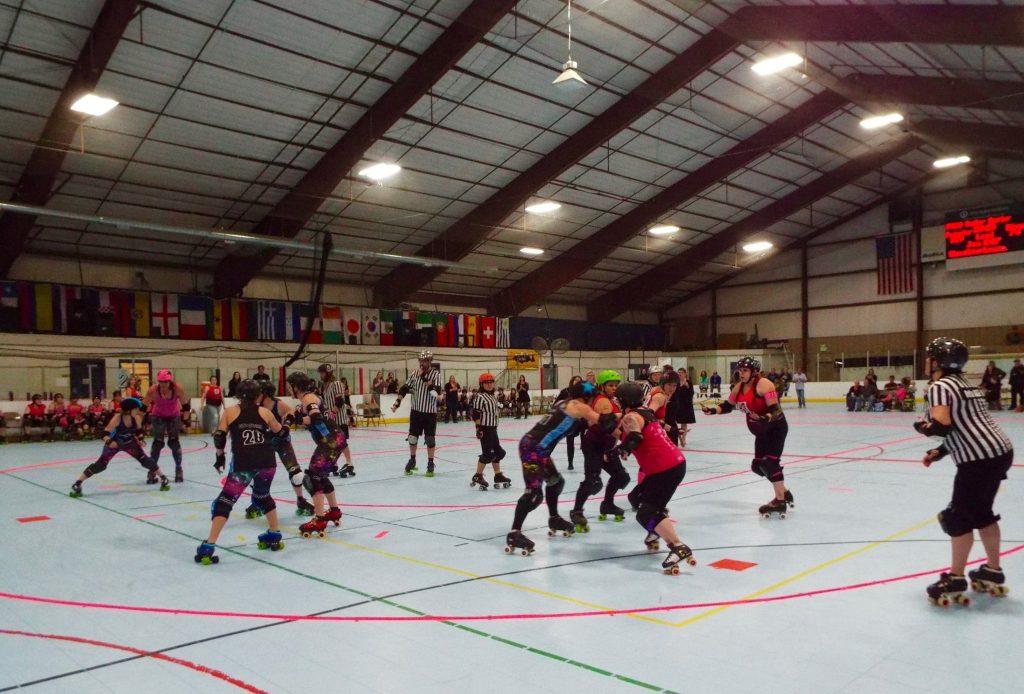 The air is buzzing with energy, people are cheering and clapping and women are racing around a track on roller skates. Roller derby is becoming a popular contact sport that includes hits, falls and many bruises.

The games, called bouts, consist of two 30 minute halves where five players from two teams, one defense and one offense, line up on the track to participate in jams that last up to two minutes. The teams, also called packs, and a jammer, those who score points, are released at the sound of a whistle. The first jammer to cut through the pack becomes the lead jammer and scores points based on how many opposing team players they pass on the track. The lead jammer can then stop the jam at anytime by tapping her hands on her hips.

Roller derby has been around since the 1880s in what was called “multi-day endurance races,” and in 1922, the sport was given the name “derby.” The sport is now known for hard-hitting contacts and funky names the players choose for themselves. These pseudonyms are often satirical, alliterations or a direct reference to pop culture.

While the sport is a contact sport, there are legal and illegal moves. Illegal brutality includes blocking with elbows, forearms, hands or the head; hitting, pushing or blocking a skater from behind. Legal moves are torso and hip checks from the side, blocking with the upper arm and whipping or pushing a team member of the same team for extra speed.

With roller derby becoming more and more popular, Fort Collins decided to get in on the action. In January 2006, the FoCo Roller Derby was launched as the first derby league in Northern Colorado. The league hosts two home teams: the Psycho Sirens and the Cinderhellas; and two travel teams: the Micro Bruisers and the Punchy Brewsters.

Smashrodite, also known as Smash or Kaylee Koch, is a 25-year-old originally from Amarillo, Texas. Smash came to Fort Collins a few years ago and was inspired by her cousin to try out roller derby.

“At the time I was working from home, so it was hard to meet anyone when we first moved up here,” Smash recalled over e-mail. “So I joined the league to spend some time with my cousin, meet people and get some exercise.”

The sport stuck with Smash and she has been skating with the league for almost two years as a blocker and jammer for the Punchy Brewsters and the Cinderhellas.

As for her pseudonym, Smashrodite has always been fascinated by Greek and Roman mythology. Originally trying to create a name centered around Athena, she found that Aphrodite would be better suited.

The team holds practices at least twice a week, two hours on skates and one hour off to prepare for bouts. The bouts take place about once a month and are mainly held at the Qdoba Events Center, just south of Harmony Road. Bouts have been played in other states before, and this summer will see a match between the Punchy Brewsters and a team from Wyoming.

“The game itself is physical, but I feel like the hits got easier to take as I have progressed and the endurance needed for play comes the longer you skate.” — Smashrodite of Punchy Brewsters

While roller derby is a safe sport, it’s not without its risk of injury. Smash has received concussions from playing and says her teammates have also experienced injuries, but mainly from skating at their own leisure. For this reason, skaters wear wrist guards, knee and elbow pads and helmets at all times.

According to Smash, the hardest part about being involved with roller derby is the “mental game.”

“Staying optimistic and not getting too down on yourself when you can’t quite get a new move, or when you’re having issues with a new drill, can be hard,” Smash said. “The game itself is physical, but I feel like the hits got easier to take as I have progressed and the endurance needed for play comes the longer you skate.”

On the other hand, the most rewarding part of derby are the team members.

In 2009, Drew Barrymore directed, produced and starred in a comedy-drama about roller derby, called “Whip It.” Set in Bodeen, Texas, a young girl, Ellen Page, discovers roller derby is the perfect way to escape her small town and figure out who she is. The film portrays an exaggerated form of roller derby, filled with punches, blood and crazy costumes. In real life, roller derby is a lot different.

“We can not throw punches or do some of the more aggressive things that are seen in that movie on the track,” Smash explained. “You would get ejected from a bout if you were to purposefully hit someone else in the face.”

Also, the Punchy Brewsters do wear “boutfits” during a game, but usually consist of fun leggings and bright colors.

“The idea that we all wear sexy outfits all the time just isn’t true.”

In the future, Smash hopes that the team sees an increase in the number of members. Also, being able to travel farther than just the states around Colorado to compete is one of her goals.

“As for myself, I would hope that the foundation with League Management that I am laying down now helps the league to continue to foster new and upcoming skaters in a fun environment, and allow for overall growth and benefits to the league as a whole.”

The league’s next bout takes place May 7 at the Qdoba Events Center and sees FoCo Roller Derby take on the Slaughterhouse Derby Girls. Tickets can be purchased online in advance for $10 or at the door for $15 general admission, $10 for seniors, students and military and kids under 12 are free.