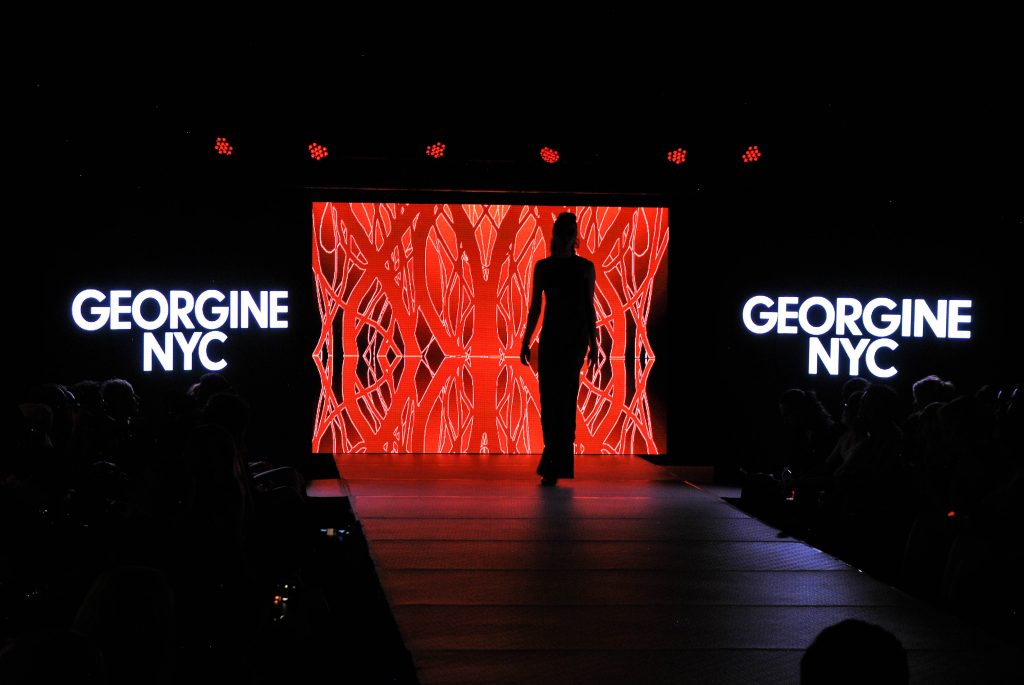 Styles showed throughout the evening demonstrated the diverse group of designers. Stunning evening wear was presented by Kouture and Soignee. Royal and ILY ILEY showed more niche styles, streetwear and bold retro respectively. A number of styles, however, sought mass appeal, including Lions in Four, Velvet Wolf, and a swimwear collection by Femme Fatale.

DFW began on Wednesday April 6 for awards night, followed by the non-traditional model evening on Thursday April 7. Sunday April 10 was the final event open to the public, and highlighted exotic hair and makeup.

“It was really phenomenal to see that alternative night, they just had all kinds of people coming out,” spectator Jim Winchell said. “Instead of your normal runway model, there were girls with tattoos, of all ages, all weights, skin tones, you name it.”

“[Modeling] is just something that I truly love to do, but it takes a lot of practice,” Rose said when asked about the secret to her success. “Long gowns like tonight are what probably take the most practice, you have to learn to kick the dress while you walk.”

Rose, who walked for Marks Lloyds Furs, was given the inaugural title Denver Fashion Week Model of the Year in 2015.

Royal, among the national brands that showed at the event, was founded by Hunter Higgins. Oversized sweatshirts, tight men’s pants, and leather skirts walked down the runway in neutral colors, accented by large screen-prints of the brand’s logo.

‘Livin’ like royalty’ is what we try to keep in mind when we design.” — Hunter Higgins, founder Royal

“We got started in about 2009. ‘Livin’ like royalty’ is what we try to keep in mind when we design,” Higgins said. He explained that the team gathers a lot of inspiration from an active lifestyle and action sports, as well.

Designers visions came to life with a variety of hair and makeup styles behind the scenes. Royal and Georgine both experimented with bold black pigment around the eyes, and Royal and Velvet Wolf played with big, teased hair.

To bring the daring energy of the runway to everyday looks, however, stylist Erik Emblem advised girls to still take risks.

“Experiment with new looks and most importantly, study from the masters. Even I do that, they know what they’re doing,” Emblem said.

The food served at the event matched the creative inspiration walking down the runway.

In addition to an open bar, the event was catered by Cherry Hills Sushi and eclectic dessert company The Inventing Room.

“Our best sellers [in the dessert shop] is probably our s’mores ice cream sandwich with liquid nitrogen ice cream,” Kleinman said. “We try to create a fun and interactive food environment.”

After their set on the runway, two models for Lions in Four grabbed drinks and snacks.

McKenna Keller has been modeling for two years and has previously appeared in Denver Urban Nights.

“My favorite part [about the collection] was that the clothes were things I would actually wear and were extremely comfortable,” Keller said.

While comfort makes a model’s night seem shorter and makes clothes more marketable, fashion week attendees seemed to have other things in mind.

Gigi Weaver, executive assistant to the lieutenant governor, decided to purchase a ticket out of her pure love for all things high fashion and glamour.

“I love fashion because it’s always a challenge, you’re constantly looking for new aesthetics,” Weaver said. “For my outfit tonight, I was thinking about spring and pastels, and I love monotone and super feminine looks. It all just kind of came together.”