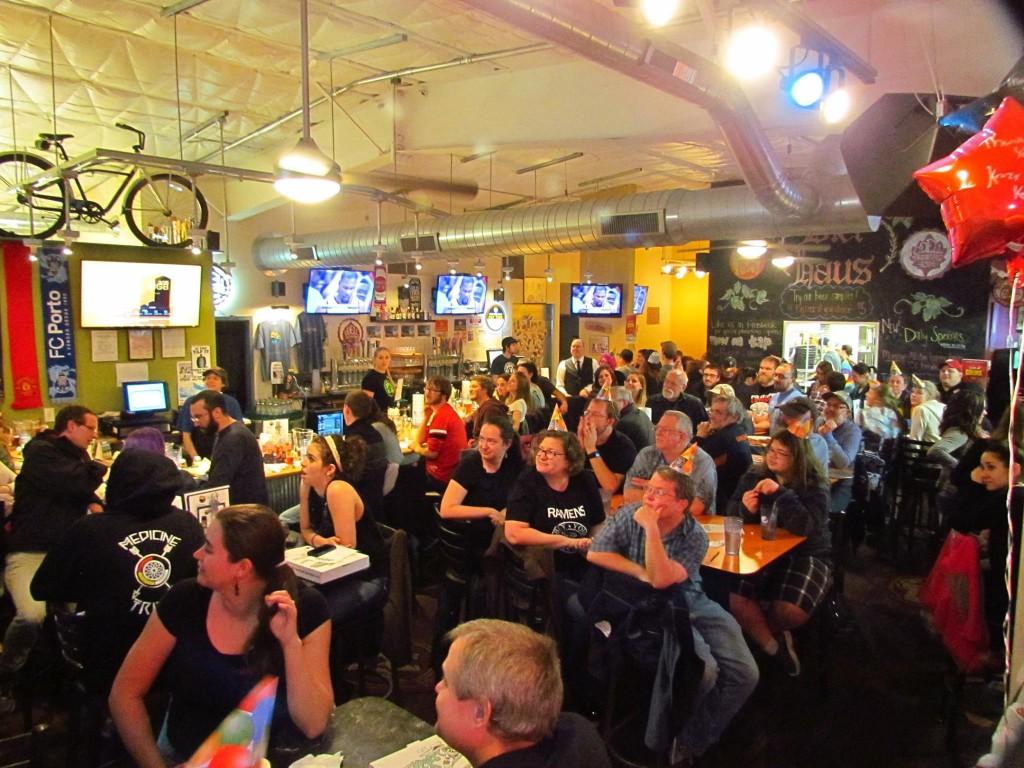 Geeks Who Drink is essentially a chance for friends to get together at a local pub to have a few drinks and answer trivia. VanSomeren was an avid Geeks Who Drink participant when he was approached about becoming a quizmaster six months ago.

“I went through an audition process and got the job,” said VanSomeren. “It’s the most fun job I have had in my entire life. “

As a quizmaster, VanSomeren is responsible for hosting the Geeks Who Drink pub quizzes. Pub quizzes are hosted by local restaurants and bars and are similar in nature to trivia competitions. Participants can play in teams of up to six people. Pub quizzes consists of eight rounds with alternating themes.

“Everybody gets an answer packet and pencils,” said VanSomeren. “I get on the microphone and tell you what the theme is and I start reading questions. Every round lasts about five minutes and the whole thing takes about two hours from start to finish.”

VanSomeren said participants’ turn in their answer sheets at the end of each round.

“Generally, about half way through the night I will announce what the standings are and give answers from the first half and I do the same thing at the end,” said VanSomeren.

Prizes vary depending on the venue but are typically gift cards to the venue hosting the pub quiz.

While pub quizzes are similar to classic trivia games like Jeopardy and Trivial Pursuit, VanSomeren said the questions are designed to be more lighthearted.

“We generally do a lot of tongue and cheek things,” said VanSomeren. “We put our own little humorous spin on things. We don’t just do the standard question and answer.”

VanSomeren gave the example of changing one letter from a T.V. show title to fit the given description.

“So if I were to say ‘Bo and Luke outwit the local sheriff while keeping slim with a dangerous bulimic regimen,’ you would change the answer from ‘Dukes of Hazard’ to ‘Pukes of Hazard,’” said VanSomeren.

VanSomeren said pub quizzes are also unique in the variety of topics they cover.

“The theme could be geography, science, history, literature, movies or music,” said VanSomeren. “We pretty much cover everything and there is something for everyone.”

VanSomeren said Geeks Who Drink’s writing team is dedicated to making the questions interesting for everyone.

“Our writers branch out,” said VanSomeren. “They write about everything. It is very inclusive and there is something for everybody, but you never know what to expect.”

“We’ve done a lot of different themed quizzes, including Star Trek, Archer, Star Wars and Game of Thrones,” said VanSomeren. ”We have a Disney themed quiz coming up, where the entire night will be about Disney.”

Pub quizzes are not all about the questions. VanSomeren said there is also a social aspect.

“You get a group of your friends together and see if you’ve got the smarts that night,” said VanSomeren. “You’re having conversations and enjoying your drinks and company. You’re not just answering questions the whole time.”

You do not have to be 21 to play a Geeks Who Drink pub quiz.

“Everyone is out to have a good time, whether you’re drinking or not,” said VanSomeren. “It’s a really fun atmosphere to hang out with your friends.”

VanSomeren said not to be discouraged if you’re not an experienced trivia player.

“Not everyone who plays is a genius,” said VanSomeren. “I’m horrible at trivia. The only reason I look good is because they give me the answers. If you come out with a group of friends with the intention to have fun, you’re definitely going to have fun.”

There is a pub quiz every night except Fridays and Sundays in Fort Collins. Some of the popular venues include Beau Jo’s and Krazy Karl’s Pizza. VanSomeren encourages students to come because it is fun and free.

“You’ll have lot of laughs,” said VanSomeren. “It is a great social atmosphere and you’ll meet a lot of friends.”

For times and locations of Geeks Who Drink pub quizzes go to geekswhodrink.com.