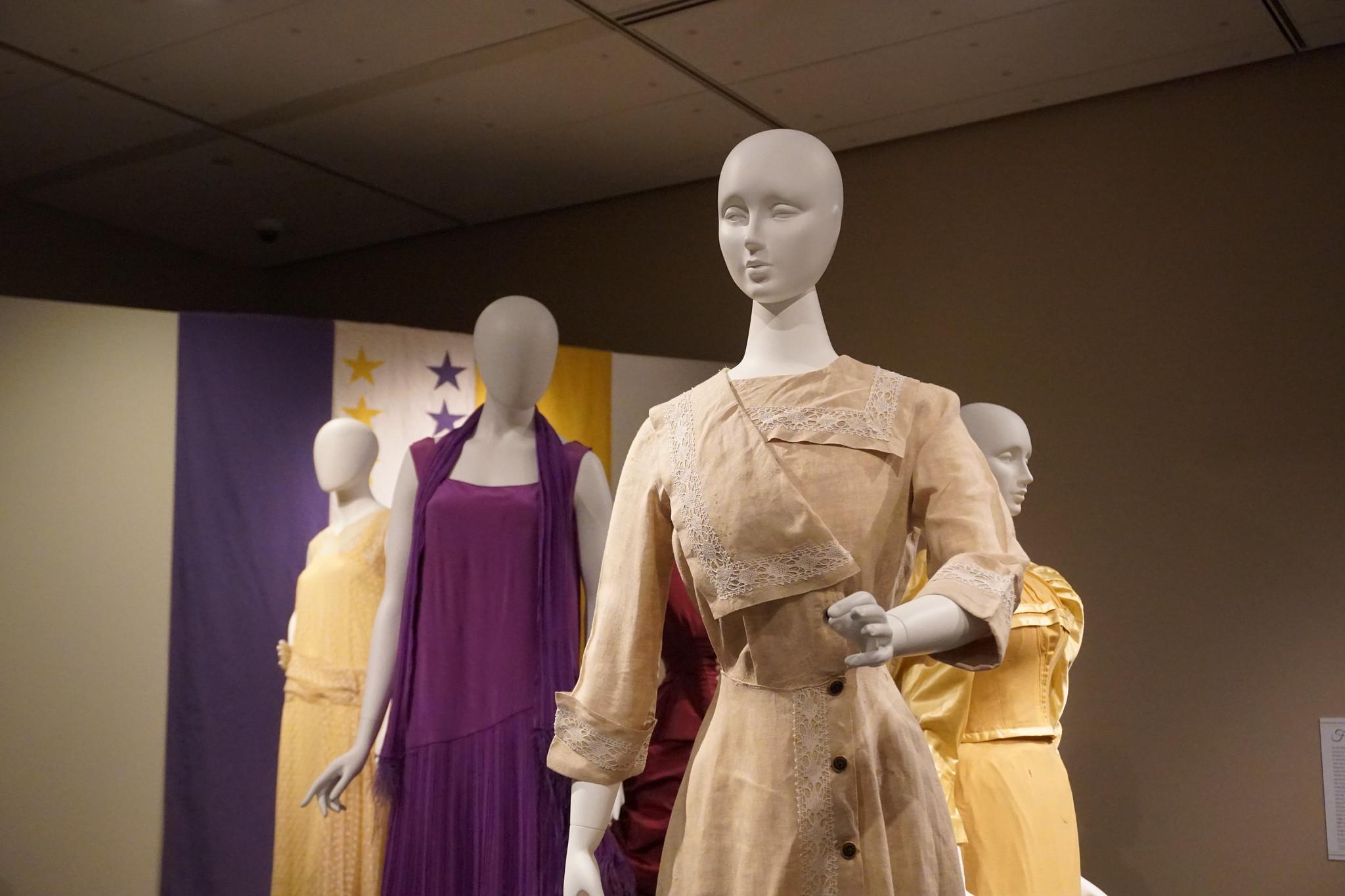 You can tell a lot about a person by the clothing that they wear. Fashion is a form of self-expression, in which people can make statements about who they are or who they want to be. Historically, people have also used clothing as a form of political or social protest. In the 1900s suffragists and women used the colors yellow, purple and white as symbols of the suffrage movement. The flower children of the 1970s countered the more conservative societal norms which predated them. Even today, clothing is an important part of how people express their opinions about what is going on in the world around them.

The R.E.S.P.E.C.T. the Dress: Clothing and Activism in U.S. Women’s History exhibit at the Avenir Museum of Design and Merchandising explores how, historically, women have used clothing as a mechanism for social and political change. The exhibit includes pieces from the women’s suffrage movement in the United States during the 1900s and progresses through different eras up to a portion dedicated to the modern age.

The museum exhibit lines up with the centennial of the ratification of the 19th amendment in 1920. According to the National Women’s History Museum, the women’s suffrage movement began in 1848 with the Women’s Rights Convention in Seneca Falls, New York. The 72 years which followed involved pickets, protests, parades and other forms of political activism. In 1919, the Senate passed the 19th amendment, which granted women the legal right to vote. On August 26, 1920, of the states ratified the amendment after the senate passed it with a two-thirds majority. However, the movement for women’s rights did not end with the ratification of the amendment. The R.E.S.P.E.C.T. the dress exhibits inclusion of time periods after the 1900s highlights both the continuation of the movement to the modern age and the commonality of using dress as a form of political and social expression.

Visitors to the museum experience the finished products, a culmination of the work of contributing parties. Before the exhibit is open to the public, however, there are hours of planning, research, design, and implementation which go into the process.  Katie Knowles, the curator of the museum and an assistant professor at the university, originally came up with the idea for the exhibit.

“The exhibit tells the history through the lens of fashion and dress,” Knowles stated.

Graduate students did the research for the exhibit finding the information and pictures to accurately tell the history. All the pieces in the exhibit, with the exception of a hat that a student provided, come from the museum’s permanent collection which has 25,000 items.

The exhibit with the clothing from the 1900s also examines how the uniformity acted as a tool for activism. Through wearing conventional forms of dress, the women hoped to find more acceptance for their political ideas which were radical for the time. Since the articles of clothing were commonplace in society, it also created inclusivity within the movement, allowing for more quantities of women to participate. 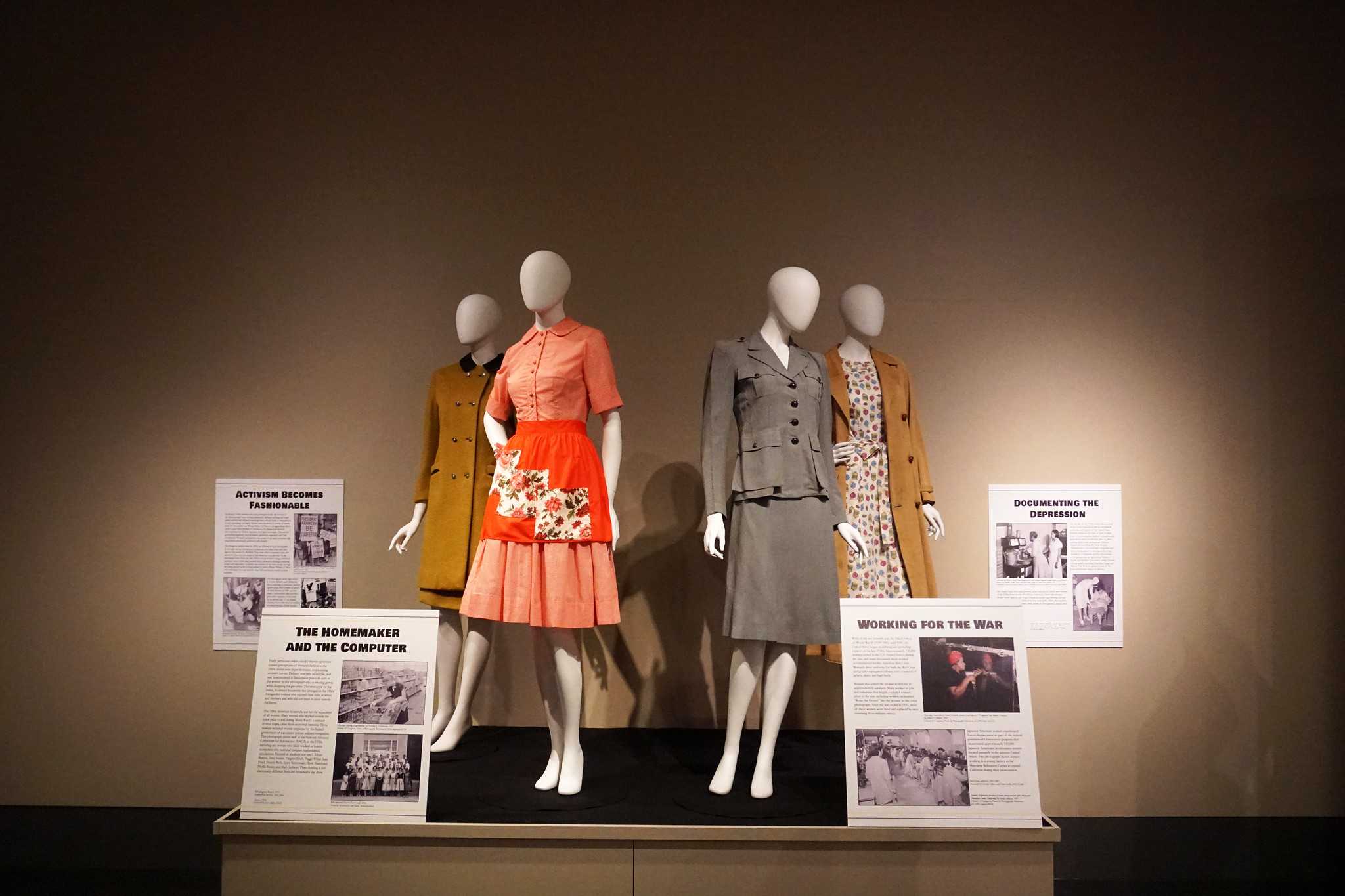 Knowles’ favorite piece in the exhibit is a Dashiki from the 1970s. The Dashiki incorporates slogans which are still commonplace today including the saying, “Feminism is Humanism”. The piece also includes sayings in French which is an important representation of the international component of the movement.

The juxtaposition between the Dashiki and the earlier and later articles of clothing also provides a demonstration of how fashion differs culturally and how it fluctuates with time.  Fashion and dress are always evolving. The exhibit provides a walkthrough of some of those changes throughout the years.

The Avenir Museum of Design and Merchandising building at the University Center of the Arts has been open since 2016. Since then, the public engagement with the museum has grown. Local high schools come to do tours and the museum is on social media. According to Heather Gottschalk, the visitor services and venue coordinator, the museum recently got on Instagram in April 2019.

“Social media has given us a way to showcase objects that do not have the opportunity to be put in a curated experience,” says Gottschalk.

If you would like to view those posts or to further connect with the museum, you can visit their Instagram page at the handle, @avenirmuseum.

While the museum is currently closed to visitors until further notice in response to the COVID-19 pandemic, you can still experience the exhibit virtually. The museum has virtual tours conducted by Knowles for the R.E.S.P.E.C.T the dress exhibit and their Women Wear at CSU and Proud to Wear: CSU150 exhibition on their home page located at https://www.chhs.colostate.edu/avenir.