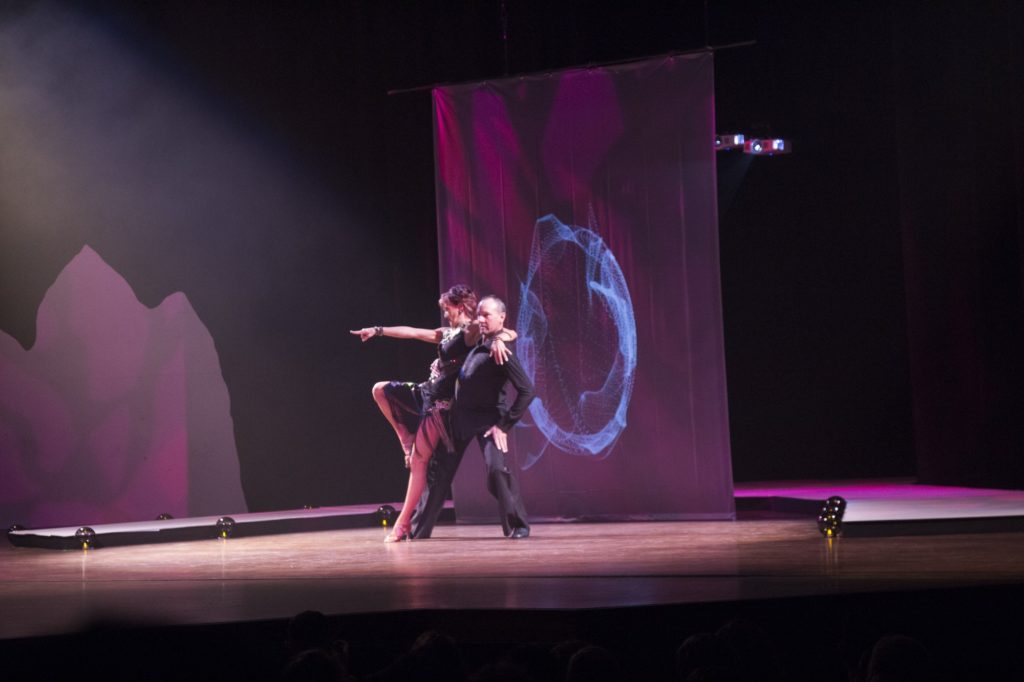 The lights went down in the Lincoln Center Theatre at precisely 7:34 for the Colorado State University Department of Design and Merchandising Fashion Show. The Master of Ceremonies invited the full house to indulge themselves in the experience of ASCENT. And, indulge they did.

The stage was setup in a unique half circle runway and a central screen showed photos, time-lapses and drone footage videos of a variety of places, from New York City to Joshua Tree National Park. This emphasized the season’s idea that the best fashion is inspired by the cyclical patterns of nature.

Audience member and proud mother, Sophie Senn, has a sophomore daughter Erin who assisted in this years’ stage design. “If it has to do with fashion, [Erin] is there.” Senn says. “We’ll be here again in a few years watching her collection.”

This season’s show featured collections from the 14 graduating designers, a collection by graduate student, Jane Rohr, and the junior class Draping Design Collection, featuring pieces made with recycled military parachutes.

Rohr, who opened the show with a dance number in one of her designs, exudes complete professionalism. This is her third graduate degree. She has been designing ballroom wear for the past eight years.

The dress she designed for this event, a glittering black and gold piece with exquisite detailing, was covered in a staggering 7,000 rhinestones that she applied herself. “It took two weeks to stone the appliques,” Rohr says. She speculates that applying the rhinestones themselves took hundreds of hours.

The seniors who presented their collections were split into four collectives: Reverie, Daybreak, Elevate and Pinnacle. Each one, while different, combined to make a cohesive story about how fashion moves the us all to be the most creative versions of ourselves.

Samantha DiPilato’s collection opened the next segment, Daybreak. Her designs included two menswear looks in addition to some infant looks, which brought two adorable babies to the stage.

Tanner Winter closed the show with what can only be described as moody snowboard wear. Winter would go on to win the Craftsmanship Award at the end of the show.

Nina Mascheroni presented a collection that was incredibly marketable and ready-to-wear, with its focus on the stylish working woman.

Jenny Vazquez stuck to an all-white palette, with her first ensemble of a structured top with shoulder cutouts and metalwork accents receiving incredible applause from the crowd.

Backstage, all the models buzzed about what an incredible experience the show had been. Each one could point to a favorite look they had been chosen to wear.
“This piece is beautiful,” model Hannah Crosby gestures to a gown by Y Hong. “It makes me feel confident and it has all these lacy, angelic, fabulous details.”

Y Hong, who has been interning in New York, flew home for this show. She won the prestigious Outstanding Designer Award, which was given by a panel of guest judges.

The show closed with some stunning parachute pieces, the material for which had been donated by Aspen Pointe Health Care Systems, a non-profit organization for veterans.

Dr. Carol Engel-Enright, the internship coordinator for the Design and Merchandising program, gave an emotional speech to close the night. She thanked the many students who put on the triumphant show and credited them with helping her get through these last few months following an incredibly difficult time in her life.

Editor’s Note: This article originally contained a misspelling of a designer’s last name. Her name is Miranda Ridder, not Ritter.