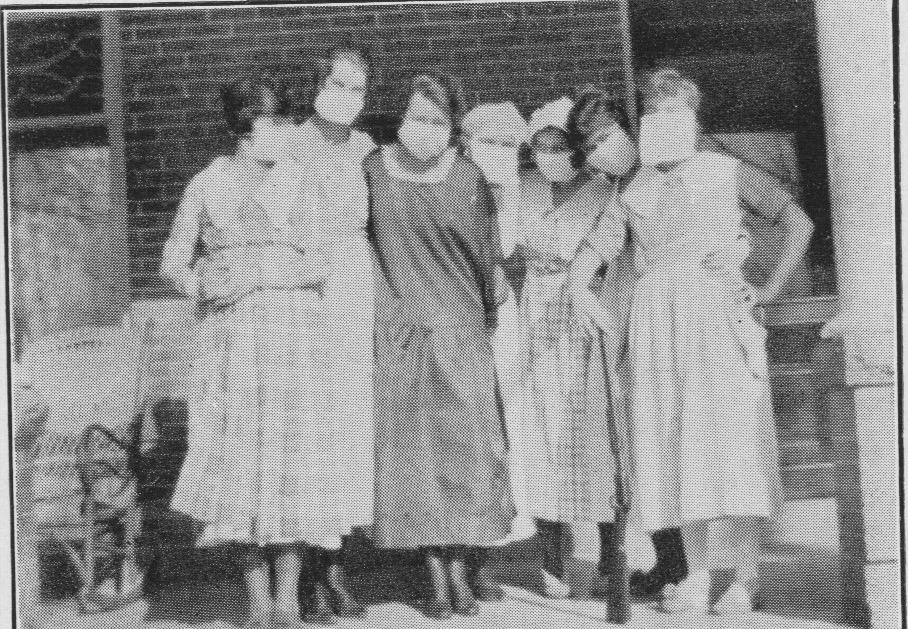 Masks, quarantine, and infection. These are all terms we’ve heard numerous times in the past several months; however none of them are completely unique to the coronavirus pandemic. The Spanish Flu of 1918 struck the world with as much strength as the pandemic we’re currently living in.

The coronavirus has hit the American economy with great strength and has placed many in new, virtual environments while changing the ways we have viewed gatherings. However, the Spanish Flu of 1918 enacted an equal amount of fear amongst its victims. The root spread of the Spanish Flu was planted in World War I. It is believed that the illness could have been born amongst the unclean living conditions of the troops. The first case of the Spanish Flu in America sprouted in Kansas at a U.S. Army camp in March of 1918 according to History.com.

The military was also the cause of the Spanish Flu’s attack at Colorado State University in October of 1918. The virus appeared at CSU as military troops were passing through campus for training. The flu hit the boys in training and spread to others on campus, according to an article from The Collegian.

Similar to the beginning of the coronavirus pandemic, people were unsure of how to handle this and weren’t taking extremely strict measures yet. While The Collegian had put out an article on “Rules for Avoiding the Spanish Flu” advising that precautions like hand washing and avoiding crowds should be taken, the article also claimed that “a school crowd is different. The ‘flu’ does not give a rap for education, and it hates fresh air. At school you sit in a well ventilated assembly room.”

This suggestion varies from the present day Centers for Disease Control and Prevention (CDC) suggestions to wear a mask and maintain a social distance from others; although when the impact of the flu hit, many would be photographed wearing masks when treating the sick in 1918.

Undeniably, the Spanish Flu would prove to have a grave impact on the population. The CDC has estimated that worldwide, the Spanish Flu, also known as the H1N1 virus, took at least 50 million lives, with around 675,000 taken in the United States from 1918-1919. The CDC also discussed a unique part of the flu. The virus targeted 20-40 year olds and those over 65 years old. The high mortality rates in 20-40 year olds was a distinct trait in this virus.

The flu targeted a different demographic than the coronavirus and the results showed on the CSU campus. In the October 17, 1918 edition of The Collegian the condition of the sickness at the University was reported on after the campus hospital saw an improvement after changing linens on the patients beds. While this article seemed to paint the improvement of the hospitals, the October 24 issue of The Collegian announced the campus lockdown.

“Two weeks is the period set for the enforced vacations, and it is hoped that the epidemic will have spent itself in that length of time,” stated The Collegian article “Influenza Closes Campus to Civilians for Two Weeks.” “Nearly all civilian students have gone to their homes, and the strictest kind of quarantine is maintained on the campus. The gates are boarded shut, and guards will prevent anybody who has not a special permit, from entering campus.”

According to an article written by The Coloradoan, 126 people died in Fort Collins in 1918, the number rose to around 145-150 during 1919. The victims of the 1918 pandemic on campus went through a similar period of isolation that our world endured when the coronavirus began to truly attack. Patients were denied visitors and could not leave quarantine until 10 days after they had been cleared—all things it seems we are too familiar with amid our own pandemic. The nurses wore cloth masks over their faces to prevent getting the virus.

The campus remained in quarantine until Nov. 21, 1918, when The Collegian printed an article that classes were to resume as normal. While worldwide, the pandemic would continue to take lives until 1919, the outbreak began to slow towards the beginning of 1919, according to The Coloradoan article.

The Nov. 21 article “Classes Resumed After Month’s Suspension” said: “It is the opinion of many of the health boards that the only way to conquer the epidemic is to quarantine each case separately, as in the case of smallpox or scarlet fever, and the men now in the barracks hospital will be held there until fully recovered.”

While the quarantine at CSU seemed to be the end of the recorded attack at the University, the Spanish Flu’s teeth would still be sunk into the world until 1919. While for the Fort Collins area, the death toll spanned its shadow over the Colorado sky for a few months, the coronavirus has cast a dreary cloud over the nation that has lasted 10 months and counting.

Just like the coronavirus pandemic, the Spanish Flu took the world by surprise. By 1918 modern medicine seemed to be able to take on anything.

“Although infectious diseases still accounted for a larger percentage of deaths in the United States than they do today, advances in medicine and sanitation had made doctors and scientists confident that they could one day largely eliminate the threat of these diseases. The flu pandemic changed all that,” History.com reports.

While each virus devastated families and reaped enormous consequences from the world, the coronavirus continues to hold one factor that differentiates it from the Spanish Flu: the prevention of gathering with families and loved ones.

“I have never been forced to stay in my house for months without hugging my grandparents or friends,” Alyssa Galasso, a freshman at CSU elaborates on her experience. “It is unusual because I don’t think we’ve ever faced something this demanding as a globe.”

“I have never been forced to stay in my house for months without hugging my grandparents or friends.” — Alyssa Galasso, freshman at CSU

While this pandemic has carried a heavy infection rate and has taken many lives, the distance it has created between people has been the biggest weight put on peoples shoulders thanks to the pandemic. While the Spanish Flu seized an abundance of lives from the world in a time when the generation thought they could conquer all, the coronavirus has taken lives in addition to time with loved ones, social interactions, and gatherings that have shaped many memories.

The Spanish Flu made impressions on the world in the form of quarantines, masks and precautions that we became very familiar with in 2020. While the coronavirus has pulled out effects like canceled seasons, online school, limited family gatherings, and a lack of festivals, it is interesting to compare it with the Spanish Flu. Both illnesses left a mark on the world through devastations and alterations.

Kailey Pickering is an aspiring journalist, passionate about conveying stories to the public in a unique way. She has a passion for telling stories and hopes to pursue a career in magazine writing. She currently studies Journalism with a History minor at CSU