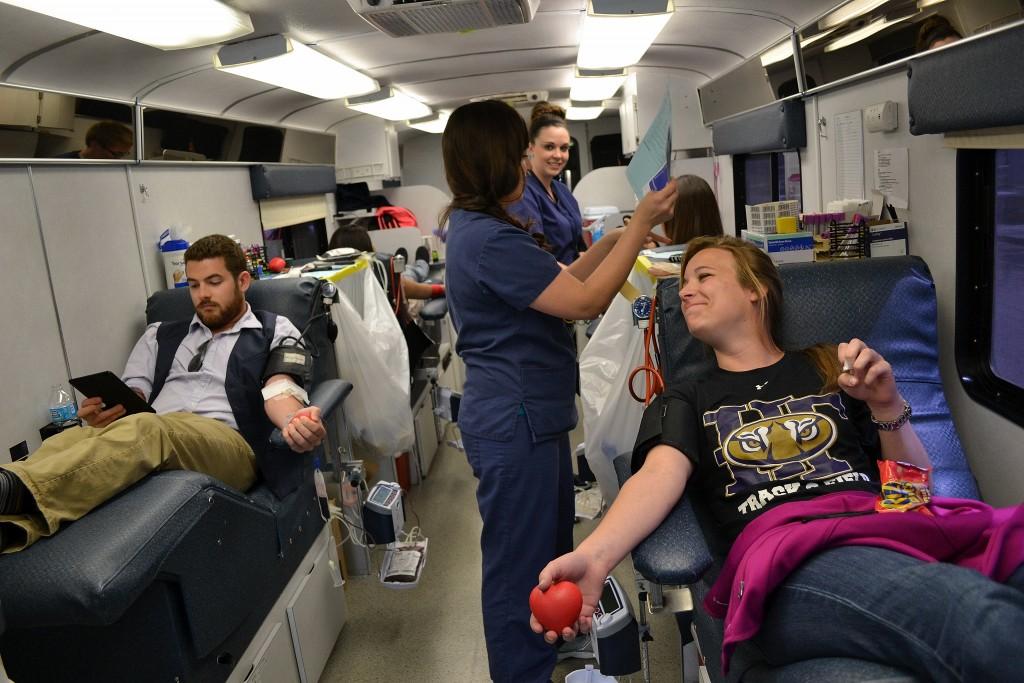 For some students in a financial pinch, donating plasma is an easy way to earn some quick cash.

Mechanical engineering senior Eric Kaliamos started donating his first year at CSU. “I was a freshman and wanted a little bit of extra cash,” Kaliamos said.

Kaliamos said he donated plasma twice a week, every week for six semesters.

According to the CSL Plasma, plasma is the liquid that carries the red blood cells, white blood cells and platelets in your bloodstream.

“Your plasma regenerates every two or three days so I figured it couldn’t hurt too much,” Kaliamos said.

“My friend does and I heard that she was getting a lot of money for it so I thought I would give it a try,” Duey said.

“My friend does and I heard that she was getting a lot of money for it so I thought I would give it a try.” — Sabrina Duey, communication studies sophomore

CSL Plasma compensates donors in varying amounts. “Depending on your weight, that’s how much money you’ll make,” Duey said.

Kaliamos said the clinic will pay about $20 the first time you go in, and about $30 if you go in for a second session within that same week.

Getting paid to sit in a chair for an hour sounds like a great deal, but many people don’t know the demanding process donors undergo each time.

With every session, donors must answer a questionnaire about their health history.

“It’s basically confirming that you haven’t had a tattoo in the past year, you’ve never been diagnosed for an STD, questions like that,” Kaliamos said.

Donors are also screened by means of a physical exam to ensure that they are healthy and not carrying any blood-borne diseases.

“They will test your vitals, and see if you have enough water and protein in your blood,” Duey said.

It is important to make sure that you prepare your body before going to the clinic.

“You have to ask yourself, did I drink enough water today? Did I eat enough today?” Duey said. “It’s really important that you have enough food in your stomach or there’s a possibility you could faint.”

The donation process can also be time consuming.

“From walking through the door to actually sitting in the chair can be anywhere from a half hour to 50 minutes,” Kaliamos said.

The length of the actual plasma-drawing process can range from 20 minutes to over an hour. “I knew some people who did it as fast as 20 minutes, the first time I did it it took me 70 [minutes],” Kaliamos said.

“You definitely have to space time out depending on if the line is going to be busy and what time you go in,” Duey said.

The volume of plasma you typically donate each session also differs.

“It varies by person, but I give about the same amount as one of those salad dressing containers they have in the dining halls,” Kaliamos said.

Many eager students look forward to the monetary reward and do not consider the risks of donating plasma.

“It varies by person, but I give about the same amount as one of those salad dressing containers they have in the dining halls.” — Eric Kaliamos, mechanical engineering senior

Donating plasma can be a painful process, but there are other lasting consequences as well.

“You build up a lot of scar tissue on the vein inside of your elbow, and that can cause problems like if you have to go to a hospital and they have to IV you,” Kaliamos said. “Definitely check with your doctor first.”

Although the process can be taxing, many students still donate plasma for the monetary and emotional rewards.

“It’s nice to know that my plasma is going somewhere to do research and medicine and things like that, but it definitely was primarily because of the money,” Kaliamos said.

“I think it was awesome giving plasma and really they do stress of how much you save a life,” Duey said.

If you are interested in becoming a plasma donor or want to learn more about it, visit the Fort Collins CSL Plasma Center at 1228 West Elizabeth St., Suite D-3 or visit CSL Plasma’s website.