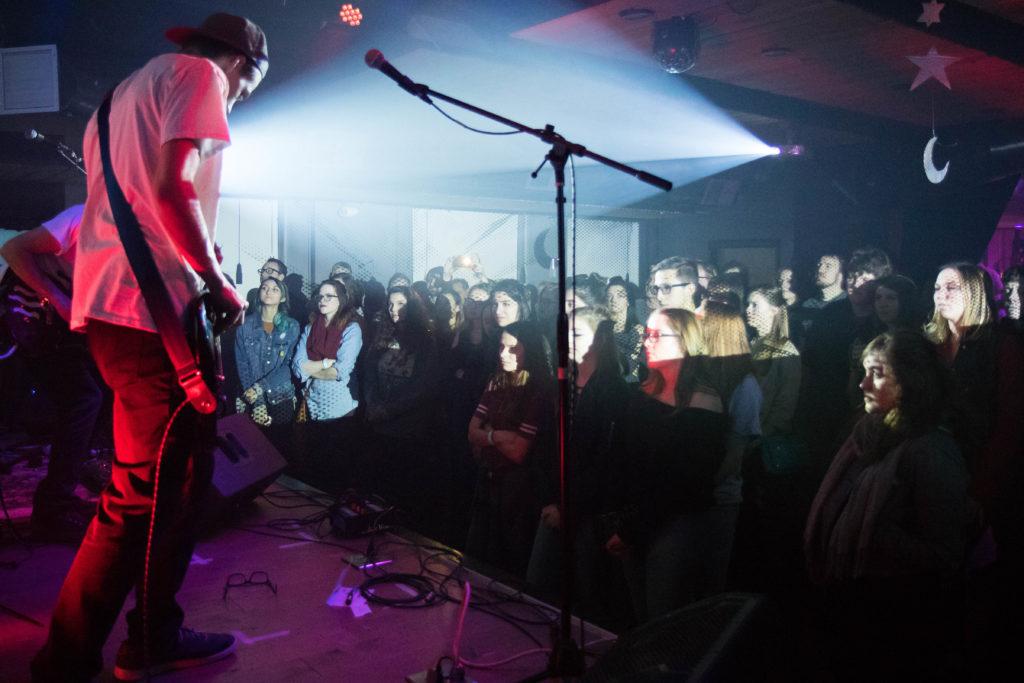 Although alternative rock band, Holdfast. is passionate about their music, the group truly stands out for the family connection among the members. The band consists of brothers Tommy, Mikey and Charlie Maddocks.

Junior computer science and zoology major Mikey Maddocks is the bassist and backup vocalist. Lead singer, guitarist, and songwriter Charlie Maddocks is a senior at Windsor High School who hopes to study Computer Science at CSU this fall.The drummer, Tommy Maddocks, is a sophomore at Ridgeview High School.

The family-centric band found its roots by following in the footsteps their uncles’ band. Along with all of their equipment, the brothers also inherited a passion for music and performing.

“Our uncles were a local Fort Collins band, called Paean,” Charlie Maddocks said. “They were a Maddocks band, like us. Their lives went separate ways and we inherited all of their equipment. It would be disappointing if we didn’t start our own band.”

Holdfast., performed at the Downtown Artery Saturday night for their EP release.

Victoria Noble has been a fan of the band since their formation and attended their performance Saturday night. “Their sound is original, and very different from a lot of alternative [artists]” Noble said.

The strong relationship between the brothers and their passion for their music is evident when they take the stage.

Charlie Maddocks taught his younger brother Tommy how to play the drums when Tommy was 10. They started off just messing around in their basement, and performed for the first time in December 2012.

Charlie Maddocks has been writing his own music since he was 14. The brothers rehearse frequently, sessions which are often loud and energetic.

“There was one rehearsal where it was really quiet.” Mikey Maddocks said, when asked about his favorite rehearsal memory. “We ended up laying on the ground and looking up at the ceiling. It was really peaceful and quiet, which was a change in pace from our normal rehearsals.”

So far, Holdfast. has performed at several local venues including Everyday Joe’s and Illegal Pete’s. They have also recorded their first EP.

The band has grown in popularity due to their collaborations with local bands Places Back Home and The Sir Band, both of which opened for Holdfast.’s EP release Saturday night. In addition, they collaborated with Evrglo Media, a media company that provides concert visuals.

Charlie Maddocks spoke about the inspiration for their most recent song.

“The Rain is our one really upbeat song,” Charlie Maddocks said. “I thought of the lyrics on a bus in Hawaii on a band trip. We were in really hard rain, and I got inspired by that. It’s also our first song with a keyboard in it, which is a step towards expanding our instruments.”

Charlie said “The Rain” is a reflection of where their music is headed in the future.

“[The Rain] is a brand new song and a look into the future of what we’re writing.” Charlie Maddocks said. “The EP is more of what we’ve done, and the show is where we’re going [with our music],”

Jacob Maddocks, a cousin of the band members, has served as the band’s manager since August 2015. “These are the greatest people you could ever manage.” Jacob Maddocks said. “They’re self motivated and really want it to happen. And we all just love each other.”

You can listen to Holdfast.’s EP on Spotify including songs “Because of You,” “I Can’t Swim,” and “From a Spark.”