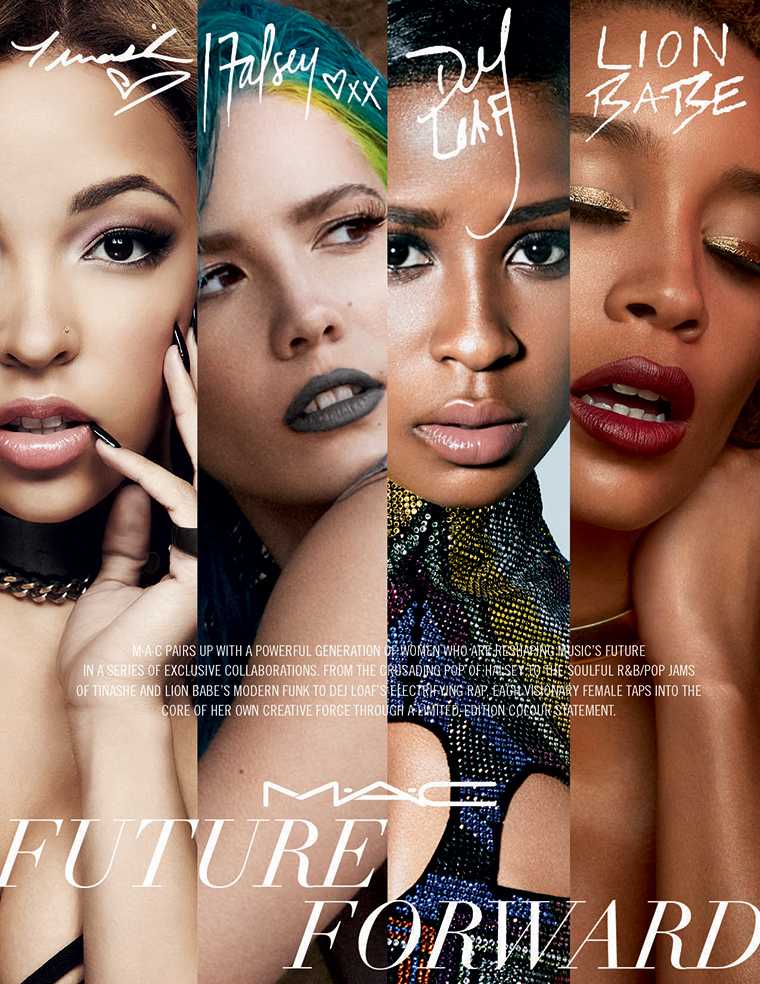 On March 17, MAC Cosmetics will introduce a new collection called Future Forward. Future Forward combines the love of music and makeup into one futuristic line of cosmetics. MAC joined forces with some of today’s hottest upcoming musicians.

Future Forward features Halsey, Tinashe, Dej Loaf, and Lion Babe’s, Jillian Harvey. These women were meticulously picked to be the faces of the campaign.

“MAC pairs up with a powerful generation of women who are reshaping music’s future in a series of exclusive collaborations. From the crusading pop of Halsey, to the soulful R&B/pop jams of Tinashe and Lion Babe’s modern funk, to Dej Loaf’s electrifying rap, each visionary female taps into the core of her own creative force through a limited-edition colour statement.”

Halsey, an anagram for her real name, Ashley Frangipane, considers New York City to be her adopted hometown. In 2014, Halsey posted her song “Ghost” on SoundCloud and earned a record deal with Astralwerks. Compared to musicians like Lorde and CHVRCHES, Halsey released her first EP, “Room 93,” in late 2014. Followed by 2015’s release of “Badlands,” her first full-length studio album. Halsey’s song “New Americana,” landed her on the Billboard Hot 100 Chart, where it has remained for 14 weeks.

Originally desiring to be an actress, Tinashe appeared on the sixth and seventh seasons of “Two and a Half Men.” Wanting to branch out from the acting world, she joined musical group, The Stunners, who opened for Justin Bieber during his My World tour. The group disbanded in 2011 and Tinashe decided to go solo. Her first major single, “2 On,” which featured ScHoolboy Q, landed her at number 24 on the Hot 100 Chart. Her debut album, “Aquarius,” came out October 2015 and premiered at the number 17 spot.

Dej Loaf (pronounced like “beige”) is a rapper from Detroit who first started making waves with her song, “Try Me.” The song caught the attention of Drake, who referenced it on his Instagram to his 19.5 million followers. After being signed by Columbia, Dej Loaf released a mixtape, and was featured on the song, “Detroit vs. Everybody,” which reached the Top Ten of Billboard’s Hot Rap Songs chart. The song united fellow Detroit artists Eminem, Big Sean, Danny Brown, Royce da 5’9” and Trick Trick.

Lion Babe is a New York-based duo made up of producer, Lucas Goodman, and vocalist, Jillian Hervey. Hervey met Goodman at a party and the two recorded their first song, “Treat Me Like Fire,” in 2012 and were signed by Interscope Records. In December 2014, Lion Babe released their first self-titled EP, which consisted of four tracks and featured Childish Gambino. The duo also appeared on Disclosure’s second album, “Caracal,” with the song “Hour Glass.” Lion Babe also released their debut album, “Begin,” earlier this month.

MAC’s new line includes lipstick, lipglass, an eye shadow palette and liquid liner. Each product was inspired by the individual style and aesthetic of each musician.

“It feels like a great thing to be able to support artists who are breaking through but aren’t necessarily at the top top, to push them forward,” said MAC Senior Vice President and Creative Director, James Gager, in a statement to Billboard.

Tinashe contributed the “Times Nine Palette” of eye shadows ($32). Eye shadows vary in color, including Black Water, a black shadow with golden pearl undertones; Quarry, a muted plum-brown; All Hands on Deck, inspired by one of the title tracks from Tinashe’s album, which is a shimmery light green.

Halsey created a grey matte lipstick that is reminiscent of gun metal ($17). The product was inspired by Halsey’s blue hair and ethereal style. Dej Loaf constructed the “Rosy-Nude Lipglass,” described as a mid-tone nude that works well with all skin tones ($15). Lion Babe is bringing her soulful take to the collection with the “Metallic Gold Liquidlast Liner” ($21).

Future Forward will be available online only through MAC’s website, and begins its release with Tinashe’s eye shadow palette on March 17, followed by Halsey’s lipstick on March 31, Dej Loaf’s lipglass on April 14 and Lion Babe’s liner on April 28.