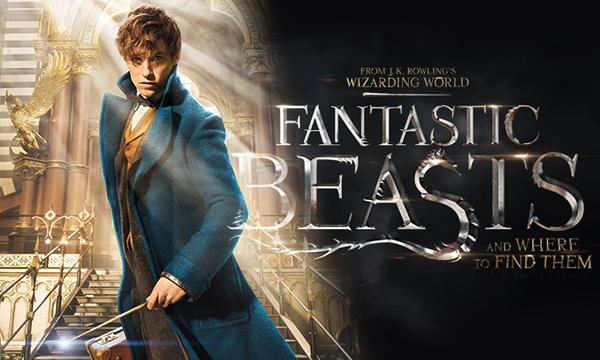 “Fantastic Beasts and Where to Find Them” is a story involving one man’s journey to study and explore the intricate connection between humans and animals. With elements of mystery, suspense, humor, and love, the film contains a well-rounded plot exploring the severe bonds of friendship through charming characters. It is a movie for all ages and one absolutely worth seeing.

Newt Scamander (Eddie Redmayne) is a magizoologist who has been commissioned to write a book titled “Fantastic Beasts and Where to Find Them.” He travels to New York for what is intended to be a brief pitstop in order to rescue one of his creatures, a Thunderbird named “Frank.”

However, while in the Big Apple, he finds himself in a predicament when he accidentally trades briefcases with Jacob Kowalski, a “No-Maj” or Muggle, a non-magic person (Dan Fogler). Multiple animals escape from Scamander’s Mary Poppins-esque bag, and he is sent out to find them.

The film is set in the 1920s, before the wizarding world has realized that these creatures are not dangerous when treated and cared for properly – in fact they could even be beneficial to society. This is what Scamander sets out to prove.

It is both refreshing and slightly disappointing for the setting be in America. On one hand, it is interesting to see an entirely new magical community/government who used different terminology and upheld different laws than the Britain one we see in Harry Potter.

For example, Americans enforce a law forbidding wizards and No-Majs from getting married. Additionally, having the entire adventure occur in New York took away a bit of the magical quality present in the Harry Potter movies; in the Harry Potter series, it felt as if we have escaped to an entirely new universe. New York is a bit too close to home to feel the same about Fantastic Beasts.

Although Scamander’s adventure was way before Harry Potter’s time, I was eager to see if there would be any connections we could make that related back to Harry Potter and was not let down. Besides the familiar spells, (i.e. Petrificus Totalus), there is also a necklace carrying the Deathly Hallows symbol, the mention of Leta Lestrange (clearly a relative of Bellatrix Lestrange), and a reference to Albus Dumbledore, who is sure to play a bigger role in the sequels in the series with his controversial relationship with the film’s antagonist, Grindelwald.

Overall, the visual effects in the film are beautiful and realistic. I suspect the visuality is even more superior in 3D, as I was already itching to reach out and pet Scamander’s creatures.

Director David Yates, who also directed the final four films in the Harry Potter series, does a wonderful job of making the characters come to life. The No-Maj Kowalski is incredibly awkward and blundering, but lovable all the same. His facial expressions are wonderfully comedic as he continues to be dumbfounded at the revelations of the wizarding world.

Queenie Goldstein (Fine Frenzy), the sister of the female lead, is one of my personal favorites. Though we don’t actually get much depth to her character, we are immediately drawn to her because she is so kind-hearted: “But we made them cocoa,” she pouts after realizing Scamander and Kowalski have sneaked out of her house.

For the most part, the film is humorous, quirky, and intriguing, despite a few fairly chilling scenes. However, Yates makes sure the camera does not dwell for too long on the corpses so that it is not too graphic.

There are a lot of assorted issues happening all at once in the movie; Not only is there the foremost problem of Newt’s creatures escaping, but there is also a group called the Second-Salemers, whose mission is to expose witchery and conduct round two of the Salem Witch Trials; an abused child, Credence (Ezra Miller), who needs rescuing from his mother; the dark force – an Obscurus – attacking the city’s citizens; secretive conversations between Credence and Detective Percival Graves (Colin Farrell) that hint at a secret the two of them were searching for; the main female character, Porpentina Goldstein (Katherine Waterston), and her job as a detective being on the line; and the question of how much to show Kowalski and what to do with him afterwards. For having so many different components contributing to the story, the writers, directors, and producers do an amazing job at tying up loose ends; by the end of the movie, everything makes sense.

“Fantastic Beasts and Where to Find Them” is a must-see, especially for fans of Harry Potter, and is currently dominating the box office. Anyone who sees the movie will be eagerly anticipating the release of the next four films in the series to see where exactly Newt Scamander’s next adventure will take him.