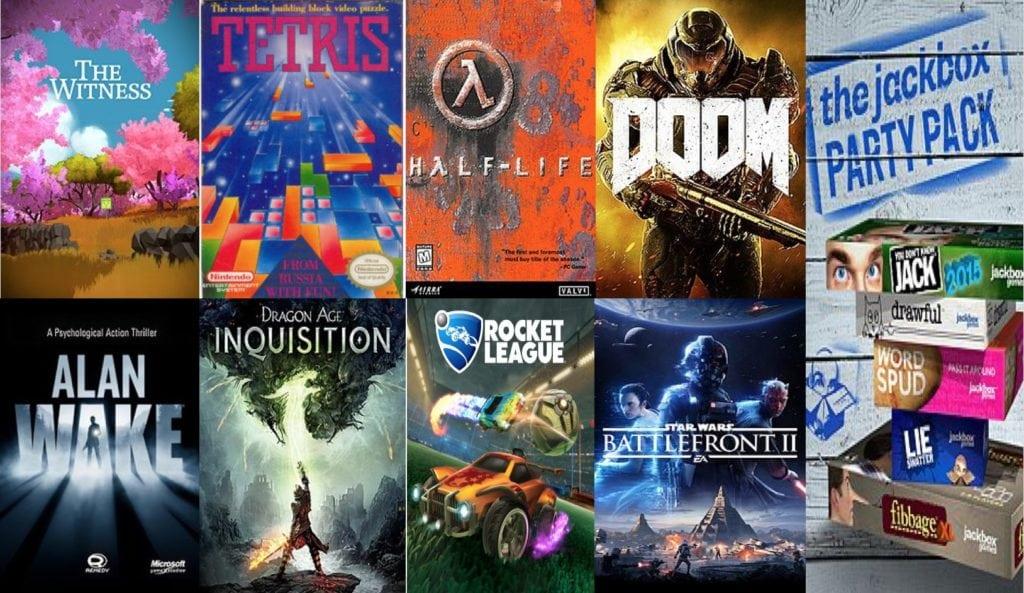 The college experience has changed quite a bit since our parents’ day. With all our technical doo-dads and portable witchcraft at our fingertips, having free time has irreversibly changed. However, every person goes through that moment when none of the games they own seem fun anymore. Whether you’re a hardcore video gamer or someone who has a couple of hours free in the day, you want games that’ll fulfill the need for fun and always be entertaining.

Here a few games that are essential for college students. Each game has been assigned a specific purpose in the college lifestyle: a friendly gathering, passing time, or when you’re so stressed and just wanna go on a mindless rampage. Each category contains a game widely held to be the best for that purpose by the video game community, as well as a personal recommendation.

Puzzle games for having 30 minutes to kill in between classes

There are times where you aren’t really willing to commit the next few hours to a game’s story, but still, want to be stimulated in some way. According to an article by Steven Petite of Digital Trends, one of the best puzzle games to pass the time with is a game called “The Witness”. The game is a first-person puzzle game taking place on an island divided into eleven sections. Each puzzle is more difficult from the last that will leave you scratching your head but feeling amazing once you find the solution.

The most iconic puzzle game in existence, “Tetris” is a game that has survived and been reimagined many times since its initial release in 1984. So naturally, this had to be my own personal recommendation not only for its classic and addictive gameplay but also its wide availability on just about any device that can download a game.

Think back with me, if you will, to a day filled with classes that all somehow manage to make your day terrible. One teacher gave you an 18-page paper due next week, and you just need a way to release that pent-up stress and rage in a way that won’t land you in jail. According to IGN’s list of the top 100 first-person shooters, that game is “Half-Life.” The game was released back in 1998 and has since come out with a whole series where you play Gordon Freeman, a scientist trapped in a facility after an experiment goes awry. The game has a general story to it along with some puzzles, but let’s not fool ourselves. We just wanna shoot some bad guys.

For my personal recommendation, I chose the 2016 release of “Doom”. Similar to “Half-Life,” there is an underlying story to the game but it mostly has more shooting and entertaining fight scenes. You’re fighting demons, so there aren’t any hard feelings or anything. Just point, shoot and go nuts.

Personally, I have always avoided this game due to the boring title and horror aspect, but upon reading more about the game I began to see the appeal. “Alan Wake” was rated number one in an article published by Lucas Siegal of Syfy Wire naming the top-25 stories in video games. The player assumes the role of, you guessed it, Alan Wake, a horror writer trapped in a certain predicament that leaves the character and player more on edge and terrified than thought possible. The game is divided up into episodes for a more story-like feel.

A personal favorite of mine with a riveting story, exploration, romance and player choices that affect the game. In this game, templars and mages meet together to discuss peace as a mysterious “breach” appears in the sky, and only you have the power to close it. This game has hours of fun in just the main story, with plenty of well-detailed side quests, optional companion missions with incredible stories and epic moments. I bought the game back in 2015 and it has remained on my list of top favorite games ever since.

This game is essentially the result of someone going, “How do I make soccer more American?” The premise of this game is you drive around in super fast race cars, crash into your friends and also try to hit a ball or something. Who cares? More race cars! This game was listed as a top-20 essential party game by Seamus Mullins of PC World. It’s fast pace and car crashing fun make it an entertaining experience that sure to liven up any get together.

First released in 2004 then revived in 2015, this series is a must for any fan of the “Star Wars” franchise or anyone who wants nice cooperative fun or intense competition between friends. In this game, you can play as a soldier or one of the main characters from the movies. “Star Wars: Battlefront 2,” released last year in 2017, is the best one on current-day consoles.

Large parties for when you have too many friends

The “Jackbox Party Pack” is also listed in PC World’s top-20 games. The variety and multi-person capability are unrivaled. This pack (some can be bought individually) contains several unique games playable through the game’s online service. Each participant is instructed to go online and join from their phone. From there, you can have a good time, and people waiting for their turn can still participate as the audience. I’d personally recommend “Fibbage,” a game that’s all about lying and coming up with absurd, hilarious answers to fill in the blank questions. If you frequently have a decent amount of guests or parties, this is definitely a game worth buying.

If you want to dive deeper into the video game community, Colorado State University has a video game club and a “Super Smash Bros” club too.