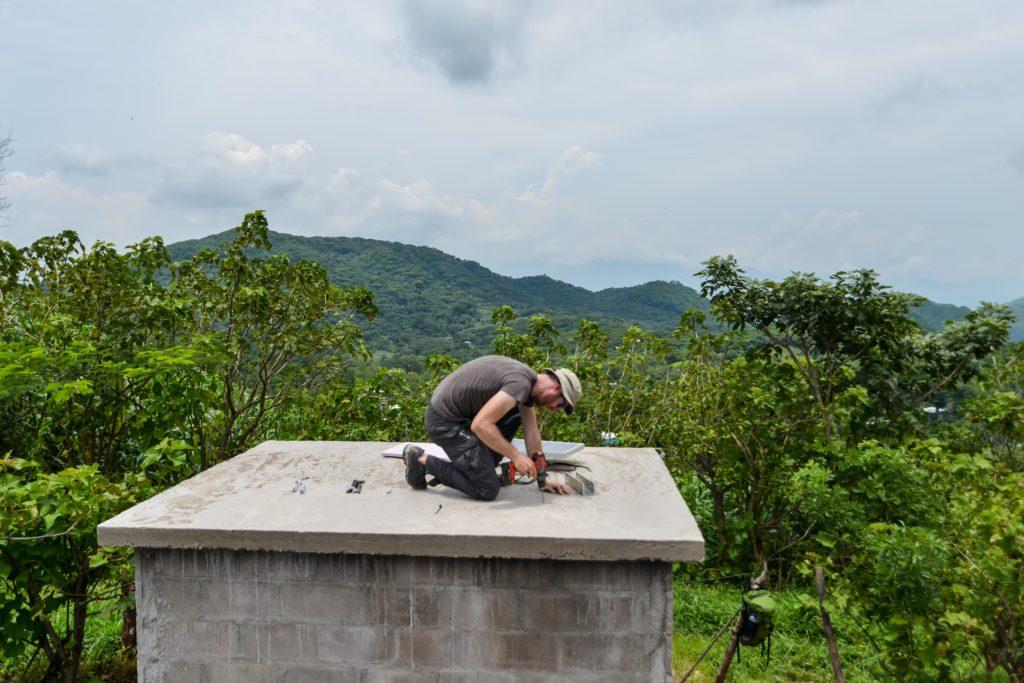 Early Sunday morning, loud speakers inside a chapel blast the preacher’s words over the rural town of La Criba, El Salvador. Located four hours from the capital, the town has served as a sanctuary for generations of families that have sought to establish a community surrounded by the hills of an ancient volcano.

This past August, a group of Colorado State University students had the opportunity to travel to La Criba as members of the school’s chapter of Engineers Without Borders. The trip was a culmination of eight years of the group’s work developing a complete water system including a well with an automated pump, a water storage tank, a distribution system and a financial plan to sustain the community long term.

In 2008, an earthquake compromised the town’s water spring and 900 people were cut off from their main source of fresh water. Ian Huber was a lead for the project.

“Essentially the community is walking miles a day to get water,” Huber said. “Now we’ve got everything installed and we’re just on the training phase. We are making sure the community knows how to run their utility, as well as knows how to maintain the lines. We’re hoping to make sure they are as self sustaining as possible so that when we leave, the project will keep going for 30 or 40 years.”

While most of the infrastructure for the system was designed by professional engineers, the students are responsible for sorting out funding and other logistics for the project once it is approved by Engineers Without Borders USA, the parent organization for the club.

John Butler is an engineering graduate student at CSU who attended the trip.

“I got brought on [this trip] to help set up the financial plan for the water system,” Butler said. “So the amount that they are charging users will sustain the future costs of the system.”

Many non-traditional students found that they could utilize their past career skills in the service of others through EWB. This was definitely the case for Peter Field, another project lead on the trip.

“I installed the control system, so the pump can be called upon by the tank to give it water,” Field said. “There’s a lot of electrical and controls components involved. My experience as an electrician definitely helped me there.”

Field emphasized the importance of dedication both from the students and the community.

Apart from a dependable drinking water source, the project provided at least three jobs through its newly operational utility company. The jobs were much needed as the town’s employment rate is around 30 percent.

“It’s an amazing experience to see how a fair amount of the world lives, they make an average of $30 a week,” Field said. “I think they’re some of the most generous people that I’ve ever met. They really don’t have much, and yet they are willing to give you all their time, all their resources, and they’re dedicated to getting this project going, and getting water for the whole town.”

“It’s an amazing experience to see how a fair amount of the world lives, they make an average of $30 a week.”— Peter Field, project co-lead

“I thought it was an amazing community,” Butler said. “For myself, I would absolutely do it again.”

Despite the lack of many amenities students are accustomed to, Huber said he felt the trip was very enriching.

“I would absolutely do it again,” Huber said. “I think it was a really eye-opening experience. I would recommend it to anyone that I think would be capable of not showering for a week.”

Butler emphasizes the need for preparation and planning.

“Its not the type of situation where you’re going to just roll out of bed and go down there and make a difference,” Butler said. “You have to put some work beforehand, and be prepared for what you’re getting into.”

Field offers advice for anyone interested in getting involved. “Start coming to meetings and learn more about our projects and then we can guide you in a way that suits you to get involved and be an active member,” he said. “There’s all kinds of ways you can find us online and get in contact. Facebook is probably the easiest one.”

The club isn’t just for engineering majors either. “Come out,” Hubert said. “We want to see people from every major, we want to have as deep an EWB community as we possibly can.”

The group plans on traveling to La Criba again in January 2017 as the first of several follow-up trips in the upcoming years.