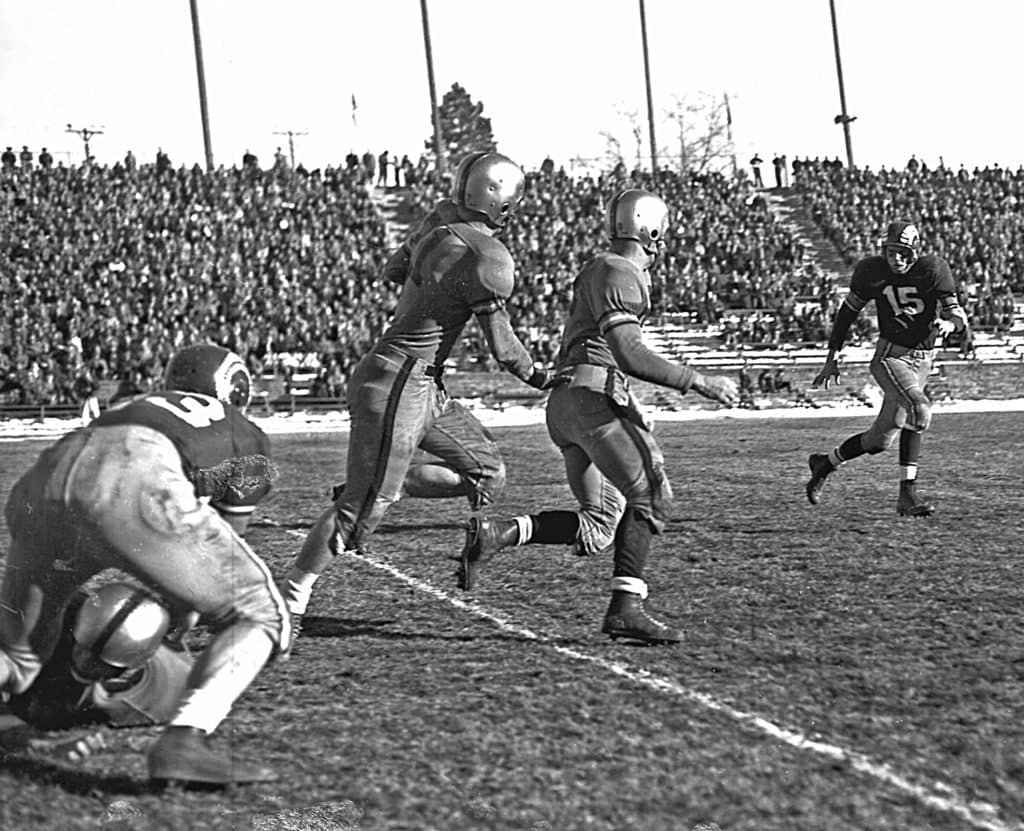 Flames licked the Colorado night sky, and strips of wood melted away like wax on a candle as the fire fed greedily on the wooden building.

The morning of Nov. 20, 1924, Colorado State University students would wake to find the work of arsonists: the on-campus Aggie Train Depot charred, a sign reading “Beat Aggies” hanging from the ruin. This could only be the work of the rivals, the University of Colorado at Boulder, reported The Collegian in their Nov. 21, 1924 issue.

The two universities were never supposed to be enemies. But how could they not be?

As the rivalry began to gain speed, pranks such as the Buffs burning down the CSU train depot started popping up in the 1920s. It wasn’t until the 1940s and 1950s that fights began to pour out onto the fields after exhilarating games.

“In 1936, there was such a riot on the field at our old stadium field that they had to bring out tear gas,” said John Hirn, a CSU alumnus, athletic historian for CSU, and author of “The History of Football at Colorado State University.”

In 1958, the epic showdown was canceled and disappeared for 25 years.

Hirn said the programs were going in opposite directions: CU was striving to get into a higher league while CSU was content with our division’s competitors. Hirn said that it wasn’t until the 1980s when a senator “was threatening to put into legislation that the two schools had to play one another,” a Nov. 10, 1982 Collegian article ‘Headlines’ by Kevin Coleman confirmed.

Rather than having a piece of paper forcing CSU and CU to play each other, the schools decided to continue competing against one another.

In the midst of this exciting rivalry, a huge factor was thrown in. The Rocky Mountain Showdown took place at the Mile High Stadium for the first time in 1998.

Stepping onto that field was an entirely new feeling that would shape the rivalry. Will Sharpe, the Associated Student’s of CSU’s directory of traditions describes the rivalry as “really kind of … like a little civil war.”

This was an NFL field. Now, it was truly an American rivalry.

With the professional field and the crowds coming from all over Colorado, the rivalry was boosted onto a pedestal.

With Mile High Stadium, the culture of rivalry began to germinate. Seeds of school pride, dislike for CU Boulder and unity between CSU students began to fly across campus.

One seed that spread its roots and blossomed as one of the school’s exciting traditions still happens to this day: Grill the Buffs.

The Grill the Buffs tradition started around fifteen years ago and consists of the smell of roasting Buffalo wafting across campus as members of ASCSU cook buffalo burgers. The tradition usually includes the football team saying a few words and a pep rally.

But 2019 was different. Sharpe wanted to change it up. His goal was to prevent people from just grabbing a burger and leaving – he wanted people to hang out and build community.

“I put a bunch of picnic tables out there this time. There were speakers, and Spike ball and my hope was people would just hang out, you know?” Sharpe said.

This year’s Grill the Buffs saw students hanging out on the grass with music surrounding them. The event brought a sense of unity before the big game. Sharpe explains that

That feeling spread across campus as students savored a juicy buffalo burger.

As the rivalry has changed and grown in various ways since the two schools first played each other in 1893, one thing has always stayed the same: the event has always kept the campus connected.

“I think that’s the one game that students can really, truly be like a Ram,” Sharpe said.