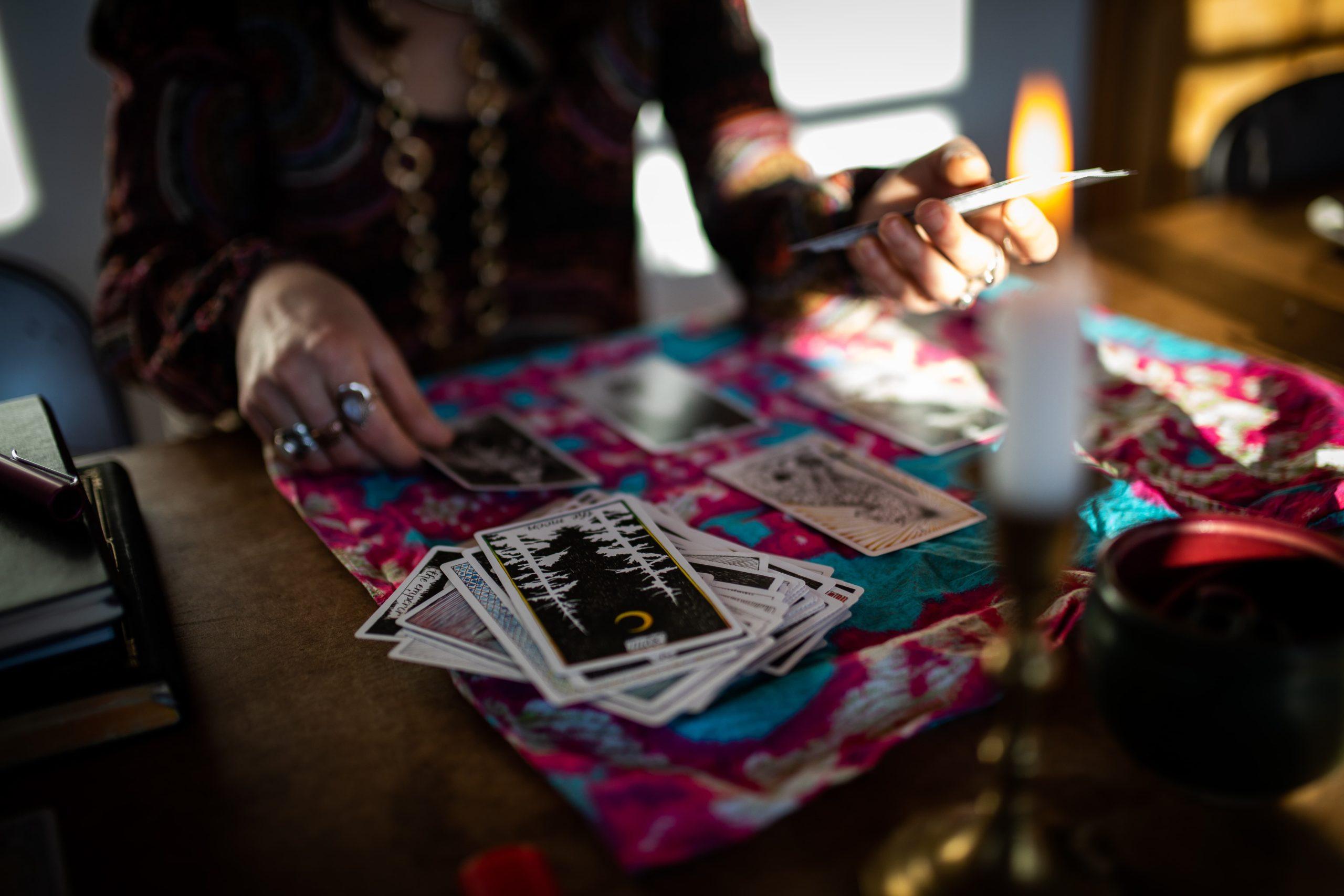 The occult, divination and ancient Egyptian knowledge all play a part in the history of the tarot. This mysterious and often misunderstood deck of cards was originally used to play a game like Bridge or Gin Rummy in 15th century Europe. Over time, the eerie imagery on the cards became associated with mysticism, and the decks became a tool for gypsy fortune tellers and psychics. Fast-forward to present day Fort Collins, Colorado, where the study of the tarot is alive and well — if you know where to look.

It’s late on a Thursday afternoon, and sunlight streams into the Wolverine Farm Letterpress and Publick House of downtown Fort Collins. The place smells like health food, coffee beans and oak wood. The only sound is a man clacking on a typewriter in the downstairs café. Meanwhile, in a darker upstairs nook, Ana Martinez Casas prepares her tarot reading station. She wears vibrant clothes and her kind dark eyes beam out from behind glasses as she shuffles her deck. On Valentine’s Day eve, she is expecting patrons with burning questions about their loves’ destiny.

However, reading tarot cards isn’t telling people their definite future. “We use the tarot as a means of self-reflection and self-meditation,” Casas explains. “It’s a tool for people to think for themselves more than anything.” Casas, like most tarot readers, is intentional in using the cards as a form of healing practice.

“There are a lot of lies surrounding the tarot,” she says. “But I respect everything, and I would never exploit people who trust me to read their cards. You can never feed on fear, even in white magic.”

Similar to horoscope readings, the artwork on tarot cards is used to tell an allegorical story of the person whose cards are being read. For instance, if the death card is pulled, it is probably not a literal omen of death; it could mean a relationship or process ending. The devil card doesn’t mean a visit from Satan; it could be interpreted as a hidden fear being harbored or self-sabotage. If the tower card is pulled, however, be wary…

All tarot decks are separated into major and minor arcana. The word arcana comes from the latin arcanus, a word usually referring to the alchemical study of mysteries both spiritual and physical. These arcana can be simplified into major life changing events and minor omens of passion, emotion, and mental elements. The major arcana are similar to the face cards in a contemporary deck; they are the most powerful in predicting a potentially life-altering force. These include the Moon, which can illuminate our subconscious fears and intuitions. The High Priestess is a card that describes the divine feminine and sacred knowledge. The Wheel of Fortune foretells good luck and karma.

Casas took over hosting duties for the FoCo Tarot Club in January. The group of bohemians meets every month at Wolverine Farm to discuss the mysteries of the tarot, perform card readings, paint and draw, “and just geek out over tarot,” Casas says. The group is open to all experience levels, from the novice just learning about tarot, to the seasoned experts who also study astrology and all things esoteric. Wolverine Farm is just one establishment with a tarot following. Other businesses that participate are the Golden Poppy Apothecary and the Equinox Center of Herbal Studies.

Nichole Chapin is another professional Fort Collins tarot practitioner. She owns The Violet Fox where she conducts her spiritual healing business. She is a self-described witch or pagan, depending on who’s asking.

“But, doing something that invokes fear is the opposite of what I do,” Chapin says.

Chapin uses her spiritual attunement to guide and provide insight on the lives of her customers. Her mission is to heal her customers and allow them to unlock their potential and divine energy to manifest their desires. Nichole has ethical boundaries — no black magic or Ouija boards.

“If something feels wrong, don’t do it,” Chapin says.

When giving advice for aspiring witches and psychic readers, Chapin recommended the Northern Lights Metaphysical Store for supplies and more information on the tarot. The Northern Lights, located at 4020 South College Ave, provides the tools of the trade. Whether you need crystals, a deck of the tarot, or a ward against bad energy, they have you covered.

If you want to try your hand at divination, or if you just want to draw pentagrams and talk about the latest episode of the Chilling Adventures of Sabrina, you can reach out to the FoCo Tarot Club Facebook group for more information.