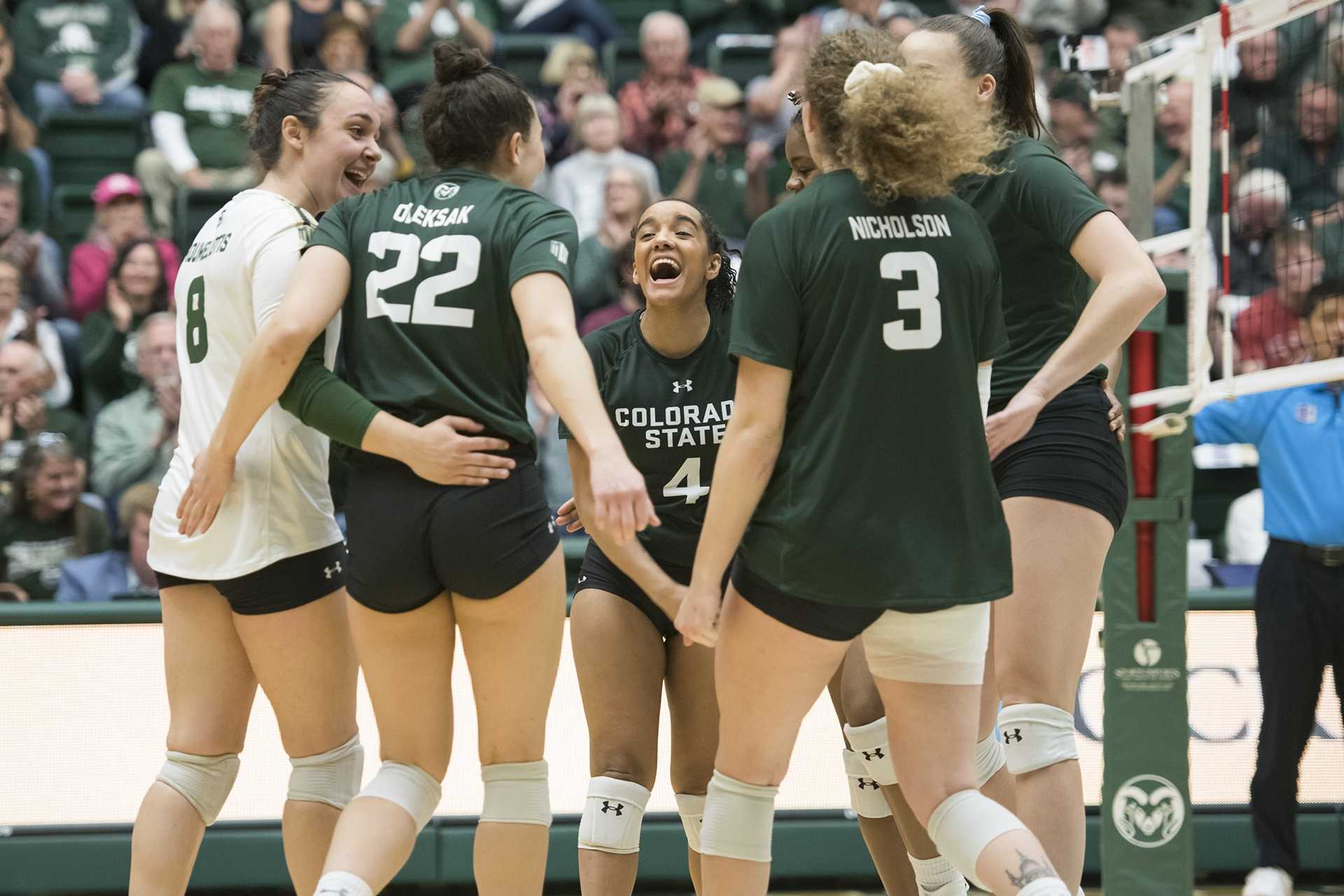 Game after game, victory after victory — Colorado State’s very own women’s volleyball team left their mark as they took victory in almost every match played in their 2019 season. Underneath the winning sets and glorious games is a team that shares a unique and supportive bond.

Katie Oleksak, the senior setter who played her last year in the 2019 season, still remembers being welcomed onto the team as a freshman. The year she came in, the team had started a new tradition of sophomores hosting a dinner for the incoming freshmen. The act was a gesture that welcomed Oleksak and the other freshmen as they began a new journey in their lives.

As the team establishes a welcoming foundation for their culture, they grow into a supportive, determined, and goal reaching group of girls. “We all really work hard and we’re all really competitive in nature, and so especially during the off season, everyone’s just pushing each other to be the best they can be,” Oleksak explained.

They give to each other, but at the same time they’re willing to go out and compete with each other every day.” —Tom Hilbert, head coach

Head Coach Tom Hilbert has been coaching 35 years, the past 22 of which he’s spent at CSU. “They give to each other, but at the same time they’re willing to go out and compete with each other every day,” Hilbert says. “And that’s a tricky balance, you have to make a pact that when you get in between the lines, you’re going to play as hard as you can and try to beat somebody right across the net from you. But then when you walk back in the locker room you have to be friends.”

The energy the girls bring to the court generates a culture that challenges their skills and grows their confidence. As they grow in these aspects, the team’s fierce playing and determination has been shaped by the hard work put into practices.

Hilbert prepares his players for matches and primes them for their opponents. “I believe in aggressiveness but not at the cost of making a bunch of mistakes,” Hilbert says. From the serving line to the completion of the score, the girls come in dynamic, anticipating what the opposing players will do and taking action to effectively dismantle them. The focus on aggressiveness and precision contributes to the success the team extracted from their opponents this season.

The team came into the 2019 season with a boom, dominating teams with every set. They fought their way to the NCAA Tournament in December where their blazing season came to a close defeat, ending in a 29-2 season record. In a University record, they had won 28 games straight, including back-to-back wins against the University of Colorado Boulder.

“It was just such a great moment,” Olesak says of their double triumph over CU, a memory she places at the top of list with her team.

Another way the team prepares for their opponents involves film and simulation. The drill called “scout team” begins with the team watching a film of their opponent playing. After studying the opposing team, they go to the courts where half the team imitates the competitor and runs their plays against the other half of the team who sticks to the CSU plays.

“The [CSU side] has to communicate and try to block them and set up their defense accordingly,” Oleksak describes. The skill is effective in helping the players develop an understanding of the other team and come to the court ready to compete on game days.

When you come and you know as a freshman, you’re going to have to dance.” —Kristie Hillyer, senior middle blocker

In between their hard work and dedication to their sport, the team finds ways to throw their own kind of fun into the mix. Kristie Hillyer was the senior middle blocker in her fifth year at CSU. She remembers the“pregame rituals and traditions that we pass on, like when you come in all the freshmen have to dance in a dance circle before every game. So that’s just a huge thing: when you come and you know as a freshman, you’re going to have to dance.” Between traditional dance circles, retreats to places like Pingree Park, and “Iron Chef” competitions, the team has had multiple chances to grow closer throughout their season.

Seniors like Oleksak and Hillyer were leaders for the newer players; they open up to the girls and show that the team is a family with people you can rely on. They demonstrate how to set up effective plays and go hard each and every day. Hillyer leads by “playing the best I can each day to try and motivate other players around me to do the same.”

This driven, welcoming, and victorious team holds a culture like no other that motivates players to be the best they can be on and off the court.

“They want to be great and they feel a great deal of pressure,” Hilbert says. “People who are not on winning teams, I’m sure they feel pressure as well, but these guys feel like they need to go further than any CSU team ever has.”

And that is exactly what the CSU Women’s Volleyball team has done in their powerful 2019 season.