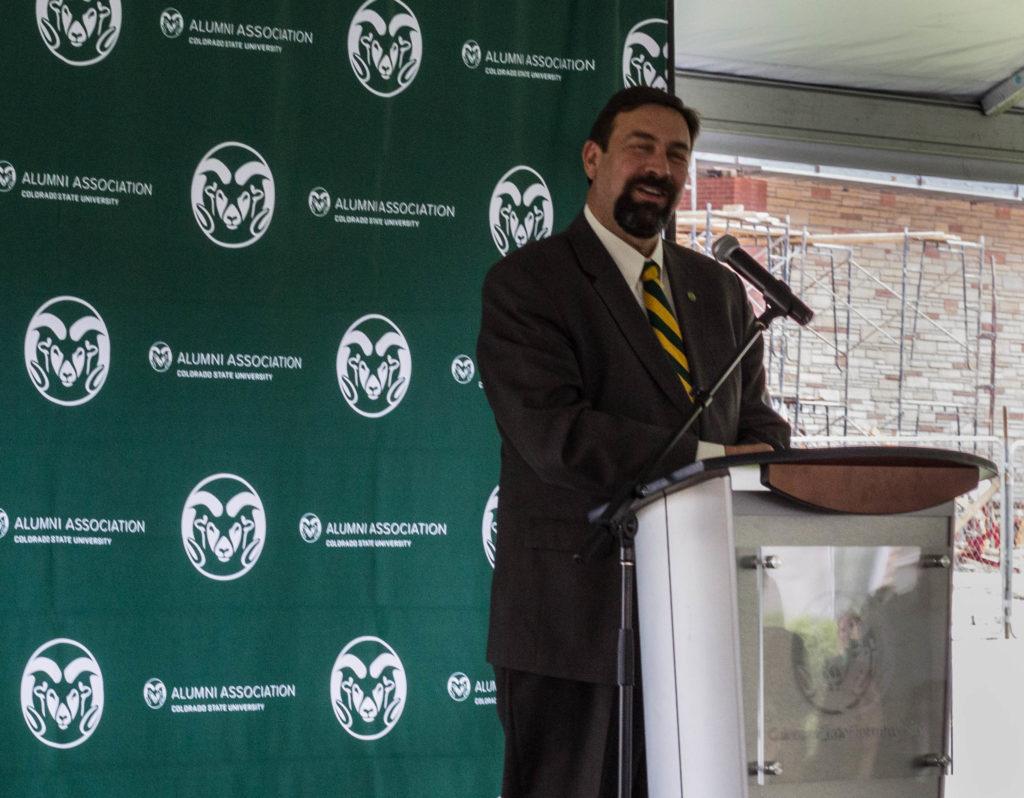 Frank is a prominent figure in CSU’s community and highly regarded by staff and students alike. He has held numerous positions leading up to president of CSU, including provost.

So what does he do here, exactly? College Avenue sat down for an interview with the man, the myth, the legend to get the low down on a typical day in the life of CSU’s president.

Aside from technical requirements he said the most important things, “aren’t specific experiences. It’s that you hire someone who really cherishes higher education institutions.” He admits that institutions are not perfect but that a president must believe that these are places, “worthy of time and investment, and require leadership willing to come into the job with passion.”

When asked what he does on a day-to-day basis, Frank said that every day is different. “It’s really hard to come up with an itinerary for a typical day,” he said.

On campus, his responsibilities can be organized into four main categories:

Of these duties, Frank said that he enjoys ceremonial functions the most, with his favorite being “probably convocation and graduation.” His face lit up as he described the excitement and passion that characterizes these ceremonies.

Frank says one of the benefits of the job is getting the chance to interact with alumni in unique ways, some of which are quite by accident (literally).

Frank recently damaged his truck by rear-ending a CSU alumnus. He said he and the alum, “spent about an hour together on the side of Laurel.” Throughout the incident, Frank said he received numerous texts asking if they had correctly seen Frank in a fender bender.

Although there are many enjoyable aspects of the position, it can also be an extremely challenging job at times.

In regards to the rampant squirrel population at CSU, Franks noted that “the squirrels treat me like they do everyone else — like I’m in their way.”

According to Frank, the most difficult part of his job is, “pretty externally facing. As someone who has spent all of their life in academia, I love what universities do,” Frank said. He noted that a large portion of being president is working with people outside of the university that come in with preconceived notions that the American education model is inherently broken.

Frank has to, “deal with explanations” on behalf of the University, “without sounding defensive.” He says this is especially difficult when, “people come in with their minds made up and their ears shut.”

Frank also commented on some of the current developments on campus–specifically the recent news of possible increases in the cost of parking passes. He said that he will essentially wind up taking whatever plan comes forward from the board of governors.

“I’ve been pretty involved in making sure that the process has really gathered information from people [this affects]” Frank said, noting that he hasn’t been actively involved in the writing or editing of the new parking policy.

With construction happening on all corners of campus, students and faculty are anxiously awaiting the new stadium construction to be completed. Frank knocked his hand on the wooden desk next to him grinning and said, “right now we are ahead of time and ahead of budget.” He is scheduled to collect the keys on June ninth.

In regards to the rampant squirrel population at CSU, Franks noted that “the squirrels treat me like they do everyone else–like I’m in their way.”

Frank recalled a time a few years ago when an owl had eaten a squirrel and left its pelt outside of his office window. Frank remembers the event as a “grizzly reminder of nature at work.”

Perhaps the most important bit of insight Frank provided, however, were details about his famous beard. What tips and tricks does he use to keep it so pristine?

He chuckled and said, “well its not so pristine, look at how grey its getting!” Contrary to popular belief, the iconic beard experiences no ritual or routine. Frank divulged that the last time he shaved it was in 1989, but when his wife came back displeased he would never make the same mistake again.

A faint knock on the door was followed by someone peeking in to inform Frank that he had a meeting to attend.

He smiled and said, “Back to business as usual.”