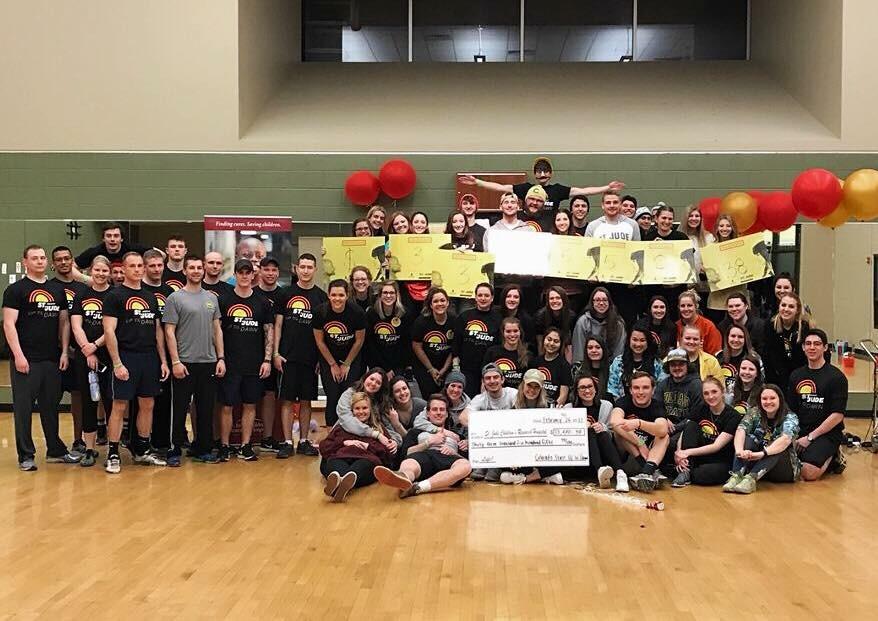 Each year, students on campuses nationwide stay up all night during St. Jude’s Up ’til Dawn event to raise money for St. Jude Children’s Research Hospital. This year, two dedicated teams from Colorado State University are participating in this event in support of a Colorado State University student who is currently battling cancer. This year, Up ’til Dawn takes place on Feb. 24, 2018.

Up ’til Dawn helps kids who are battling cancer and other life-threatening diseases by raising money to cover costs for them and their families. Families never receive a bill from St. Jude for treatment, travel, housing or food.

“[St. Jude] sees their mission of saving and improving children’s lives from life-threatening illnesses and take every avenue to fulfill their purpose,” Aimee Wakeman said, a CSU senior and Up ’til Dawn event/logistics director.

Within numerous participating teams, there are two devoted teams of six women each who will be playing for a purpose this year. In December. 2017, Camille Goodale, was re-diagnosed with cancer. In support of Goodale, these women have come together for Up ’til Dawn to form Camille’s Team, which has already collectively raised over $1,300 for the event.

Goodale’s “soul sister,” Aimee Wakeman, cannot join a team as a member of the Up ’til Dawn executive board but still supports her and has personally raised $700 so far. “Anyone affected by cancer can tell you they would never wish it on someone else,” Wakeman said. “So in [Camille’s] honor, I have fundraised and encouraged others to fundraise as well.”

Goodale is a senior at CSU and was first diagnosed with acute lymphoblastic leukemia in April 2016. She is the third member of her family to battle the disease. “It was very shocking. I thought I was invincible,” Goodale said.

While this diagnosis completely changed the course of her life plans and put her in a position she never thought she would be in, Goodale kept a positive attitude and a driven mind toward beating cancer. She credits her support system of friends and family for giving her the strength to keep pushing. “[A friend] sat down on the bed…and she said, ‘I will move mountains for you,’” Goodale said. “It really made me feel like I was a part of this community and that I wasn’t going to get forgotten.”

Through many rounds of chemotherapy, spinal taps, months spent at the hospital and the battle with this disease, Goodale finally started remission chemotherapy in late 2016 and was on the road to healing.

Though she and everyone else thought the battle was over, after about a year through the two-year course of remission chemotherapy, Goodale relapsed in December 2017. She has since been through more chemotherapy and a bone marrow transplant, but treatment was not working. To act fast in fighting off cancer again, Goodale made the decision to go to Seattle for a Car-T Cell Therapy treatment. She is currently there receiving cell therapy under the care of her doctors.

Throughout this whirlwind of bad news, life changes and the constant battle, her support of loved ones remains and is stronger than ever. While she is in Seattle, Goodale has all the support from her friends here at CSU.

“I did Up ’til Dawn for the first time last year and had so much fun at the event and raising money for a great organization, but this year it means so much more to me because of Camille’s relapse with leukemia,” Amy Carvutto said, a CSU senior and Camille’s Team participant. “Having a friend go through something as difficult as cancer for a second time at such a young age really puts things into perspective. Giving up one night to raise money for kids fighting this awful disease is so so worth it and makes me feel like I am helping in some small way.”

Goodale’s friends know that by joining Up ’til Dawn in support of her, they can make a difference in the lives of others who are fighting just like her. “The best thing I can do now to help battles like [Camille’s] is to fundraise for organizations like St. Jude that are searching for cures,” Makenna Spencer said, CSU senior and Camille’s Team participant.

The battle for Camille and others like her continues, but St. Jude’s Up ’til Dawn and participants like Camille’s team are working to help, one donation at a time.