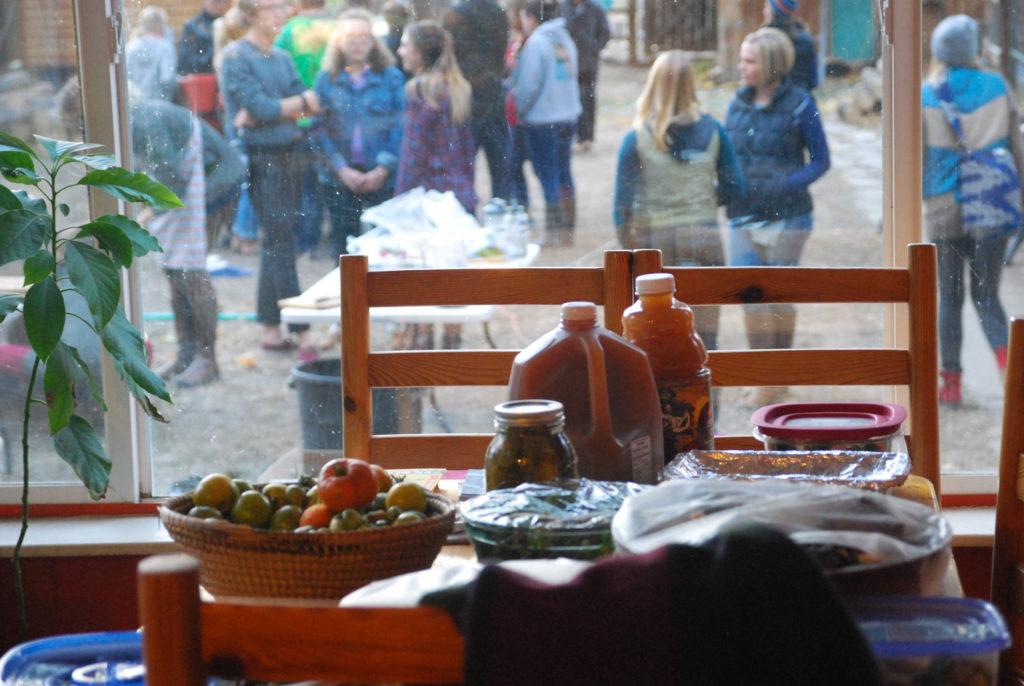 Every night before bed, students set a series of iPhone alarms dictating various amounts of time to get ready in the morning. After sleeping through almost all of them, they sprint to catch the bus before 10 a.m. lecture and buzz about campus until it’s time to leave for work. Three breaks in this busy routine are typically meal times, but there often isn’t time in a busy student schedule to cook from scratch each night.

Everything in today’s society is constrained by time.

One student group seeks to change that mentality. The student organization Slow Food is a group of foodies seeking to reconnect with the cooking process. By taking the time to select quality ingredients and combine them well, members gain a newfound appreciation for food’s role in our everyday wellbeing.

The club fosters a sense of community through monthly potlucks, which are contributions made from healthy, local foods. Club leadership also plans workshops so members can learn more about preparing their own food.

Emma Giloth, a graduate student in global social and sustainable enterprise and current president, guides the organization towards broader objectives.

The group is new to campus, only officially launched this semester, so they are still working collectively to define a chapter direction.

As of now, the group’s membership hovers around 25, including both students and passionate citizens.

“I’m taking a long range view,” Hines said. “I’m not concerned about this getting big really fast. I’ve always had a vision of two concurrent groups: students and citizens.”

Hines owns the Welsh Rabbit, which allows him to simultaneously engage the public outside of CSU and put Slow Foods’ ideals into practice.

“All food should be good, clean, and fair,” Hines said.

Good food, the first part of that mantra, is simple enough — it is presented beautifully and tastes delicious. Clean refers to knowing where your food comes from and ensuring it has come in contact with as few chemicals as possible. Fair is perhaps the broadest category, as it encompasses ethical treatment of animals, environmentally friendly practices, and economically responsible development.

“I’m passionate about the local aspect, like eating things that grow around you already or are wild,” leadership team member Julia Wockner said. “I feel like my entire life is Slow Food. I just kind of live it.”

Wockner practices what she preaches. She and her mother just completed their first season growing food for members of the surrounding community.

“We started small, which I think was good,” Wockner said. “We produced eggs and produce weekly for about ten CSA (community-supported agriculture) members.”

She also explained the importance of succession planting, which refers to planting carefully to ensure a different harvest each week.

On Oct. 18, Wockner hosted the monthly potluck on her family’s farm, offering a cozy, rustic setting. She also taught the group how to ferment their own kimchi and hand-press apple cider.

The event drew a varied crowd, including students of all ages, faculty and the general Fort Collins population.

Stephanie Voorhes attended the event with her friend, CSU academic advisor Liz Hysen, who heard about the event from the Welsh Rabbit’s Facebook page.

“It’s neat to meet people who want to spend an evening after work doing stuff like this,” Voorhes said.

DeMoss recognized the name when he walked by the booth. “My mom has a friend who is a chef and really involved [with Slow Foods],” he said. “I really like the idea that everyone can eat healthy and locally.”

While the group does not primarily engage in food social justice, they do share a common set of values.

“It’s important to teach the community to eat food that’s sourced locally. A lot of the population doesn’t think that’s important,” DeMoss said. “We need to go back to that better, more sustainable way to live off the earth.”

As the group builds upon Slow Foods’ three key ideals (good, clean and fair), Hines said, “We’ll have this deeper connection not only to the food, but to each other and the types of long-term impacts I’m hoping we can make.”

Individual chapters in towns and communities are encouraged to tailor their activity to members’ interests. Previously explored areas are incredibly diverse, ranging from cultural preservation of food to ensuring equal access to nutritious and sustainable foods. Members are also encouraged to develop any unaddressed causes they feel passionate about.

Slow Food International hosts an annual global event called Terra Madre. Giloth attended this past September as a delegate. The event describes itself as “part conference, part marketplace, part party and all inspiring.” Delegates are selected from every country; the United States sent 400 delegates.

“It was amazing that they really focused on such a wide variety of people,” Giloth said. “[Delegates were] everyone from farmers who could never afford to go to wine connoisseurs.”

For those disappointed about missing the gathering in Italy, an event is coming up right in Fort Collins’ backyard. Slow Food Nations, the American version of Terra Madre, is scheduled for July 14-16 in Denver.

Connect with the CSU chapter here or on Facebook.