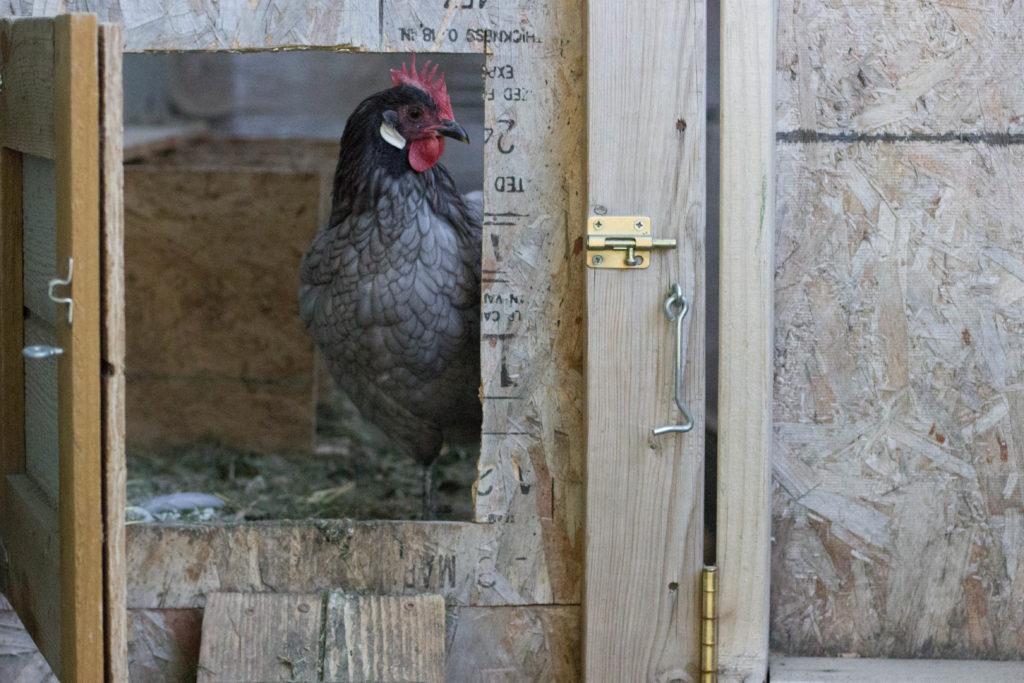 The McGeehans stir in their sleep as the sun just begins to peek over the horizon. They’ve been awoken by a soft crowing. The sound doesn’t belong to any predators, just Agnes, head chicken in the pecking order.

Josh McGeehan has been raising chickens in his backyard for a year and a half. When he and his wife, Liz, purchased their home, the coop and run were already installed.

With all the materials already at his fingertips, there was no way the campus Cru leader couldn’t try his hand at the newest phenomenon in sustainability practices — urban agriculture.

“I’m a bit silly with them. I’ve named them and they all have personalities.” — Josh McGeehan

Urban agriculture references the growth of food or animal husbandry within the city of Fort Collins. Three years ago, the city code updated practices regarding chickens and bees, in addition to allowing allowing goats and ducks.

McGeehan, however, has an unusual relationship with his poultry.

“I’m a bit silly with them,” McGeehan said. “I’ve named them and they all have personalities.”

All eight chickens are a different breed so he can easily differentiate them: Simone, Gertrude, Agnes, Big Betty, Sylvia, Mildred, Kiersten, and Louisette.

Owners are often discouraged from bonding with the animals because common practice is to slaughter them for meat after they stop producing eggs, typically at two or three years old.

Chickens not only provide farm fresh eggs, but allow a household to practice compost procedure by feeding the animals kitchen scraps.

“We probably break even between their feed and not purchasing eggs,” McGeehan said. “Getting a coop is the most expensive thing, but the chickens themselves are pretty cheap.”

Store-bought chicken coops can run anywhere between $200 and $400. One Colorado State University student sought to mitigate the financial barrier by building his own coop. Undeclared sophomore Charles Zablocki spent the summer constructing the coop, with all materials coming in under $100.

Prior to bringing chickens in, however, coops must be inspected by the Larimer Humane Society after paying a thirty dollar application fee. The Coloradoan lists 51 licenses issued in 2015.

Another administrative task crucial to the success of urban agriculture is approval from landlords and home owners’ associations. Both entities are authorized by the city to prohibit livestock.

“Our landlord loves it and is on board,” Zablocki said. “She actually can’t do it in her neighborhood because of her HOA.”

Some animals require significantly more preparation and care, however. Goats, for example, must be vaccinated and licensed annually and owners must first pass the urban livestock exam.

Urban agriculture also encompasses produce. If the harvest is for personal use, there are very few city restrictions. Use of hoop houses or commercial resale necessitate licenses through the city.

“Most college students are very busy so it’s important to focus on quality over quantity when you’re starting out,” Branson said.

Both gardening and animal husbandry allow households to move closer to the locally-sourced food model that Fort Collins values.

“We just go to the grocery store and don’t even think about where our food comes from,” Zablocki said. “They are all different colors and sizes, so you know they’re natural. Fresh eggs just taste so much better than store bought eggs.”