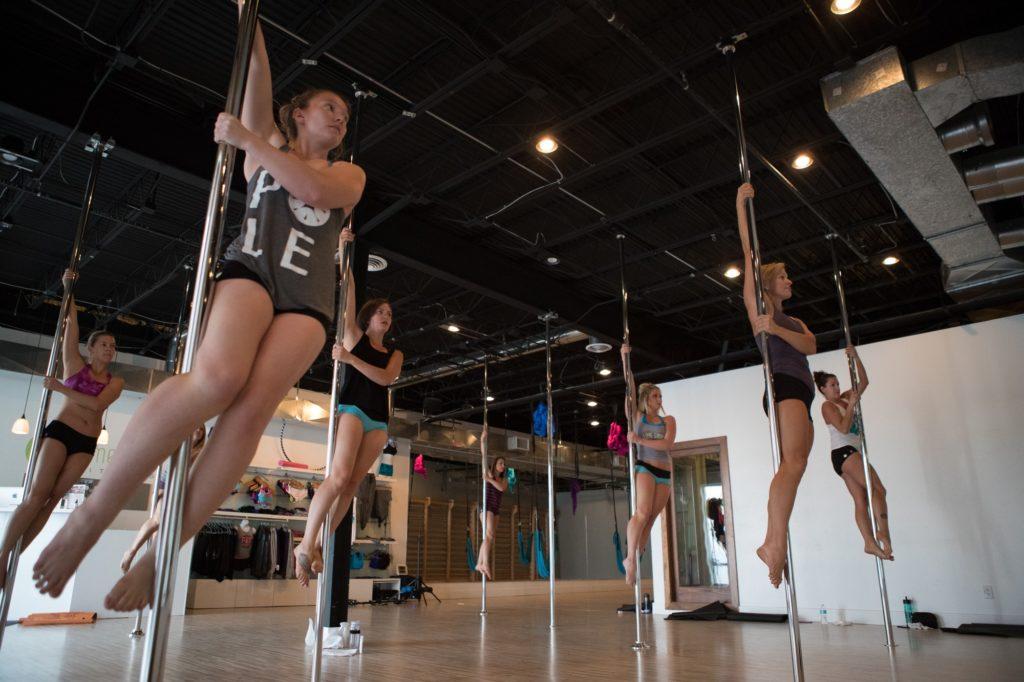 Lime Light Fitness is a studio in Fort Collins that is turning that image upside down. The studio offers pole classes as a fun and unique fitness option for anyone willing to try it. Eastyn Moore has been attending pole classes at the studio for almost two years.

“It’s a lot of fun,” Moore said. “It’s different from any other kind of work out because you don’t get bored of it. It’s not like going to the gym where you struggle to get there, it’s something you look forward to.”

Studio founder and owner Lacy Lisitza already had an extensive background in fitness and personal training when she first had the idea to start her own business.

Originally called “The Pole Party,” the business started out in 2008 with a mobile model, catering mostly to bachelorette and birthday parties.

“It started out super small,” Lisitza said. “I had one pole and I would drive to your house where I would teach a class, but I always had this dream of owning my own studio.”

Then in 2010, Lisitza began renting the space beneath Café Vino where she started to build a larger clientele.

“Finally in 2012 I took the big leap and took out a lease to open up a studio,” Lisitza said. “It’s been quite a crazy and fun journey and I wouldn’t change a thing.”

Despite its relatively recent growth in popularity, there are still some stigmas and stereotypes associated with pole fitness.

“The history of pole definitely comes from a gentleman’s club era,” Lisitza said. “So my goal for the studio was to ditch any resemblance to that. I wanted it to be very bright, light, fresh, and clean. I wanted a space that just feels inviting and welcoming and I definitely feel like I’ve met that goal.”

Dancers at Lime Light Fitness often have to clarify misconceptions about what they do. Sheryl Seagraves does her best to help people view pole fitness from a new perspective.

“There are a lot of people who just think it’s stripping, so I try to specify the difference between pole dancing in the commonly understood sense of strip clubs versus pole fitness,” Seagraves said. “There’s no stripping at all. It’s about building strength and flexibility.”

Several of the dancers explained that pole fitness helped contribute to their increased self esteem. Sarah Aldersea has noticed this change in the two years that she’s been taking pole classes.

“It totally upped my self-confidence and my body image,” Aldersea said. “I think when you’re up there, you feel sexier, you feel like you can do anything. I’ve definitely conquered things that I never thought were possible.”

“There’s no stripping at all. It’s about building strength and flexibility.” — Sheryl Seagraves

Lisitza said she has also witnessed her students benefit from a self-esteem boost after taking her classes.

“One of my favorite parts about the studio is the self confidence that I see start to shine out of women who are really nervous or may not be confident in their own skin,” Lisitza said. “I love watching these girls smile from their own accomplishments and watching their self-esteem soar through the roof and the next thing I know they are rocking out and their heads are held high.”

The dancers describe the environment at Lime Light Fitness as supportive and non-judgmental.

“The common conception is that you have to be skinny and dressed in skimpy clothes,” Seagraves said. “I can go in as I am into a completely supportive environment and it is so encouraging.”

“There’s no body shaming,” Aldersea said. “A lot of times at gyms you feel like you’re being shamed if you’re not in perfect shape or if you can’t do something—it’s not like that (at Lime Light).”

The veteran dancers offer some advice to anyone who is hesitant about signing up for a class.

“They have all different levels so don’t be ashamed or scared,” Moore said. “The instructors work with you one-on-one and help you to get to the level that you want to be at.”

Lisitza also had some words of wisdom to offer to beginner pole dancers.

“I always say to not get frustrated if there’s a move that you can’t quite get,” Lisitza said. “We’ve all had to start with the basics and we all had to go through feeling awkward or feeling frustrated. Pretty soon you’ll start seeing the progress that you’ve made.”

The studio also holds an “Intro to Pole” class every Friday evening for $5.

“It’s a fun Friday evening to just come play and try it out,” Lisitza said.

The affordability is great for college students on a budget. According to Lisitza, about half of the students who take classes at Lime Light Fitness also attend Colorado State University.

“I really think it’s just a nice study break,” Lisitza said. “Especially when you’re sitting in lecture and sitting doing homework, it’s important to get up and get your body moving for that hour and just have a really good time.”

If you find that the pole classes are not for you, Lime Light Fitness also offers classes in yoga, aerial silks, and Lyra—an aerobic exercise performed on a rotating aerial hoop.

Classes are available for purchase individually or in packs. For more information or to sign up for a class, visit www.limelightfitness.com or visit the studio at 1611 S. College Avenue, Suite 102.