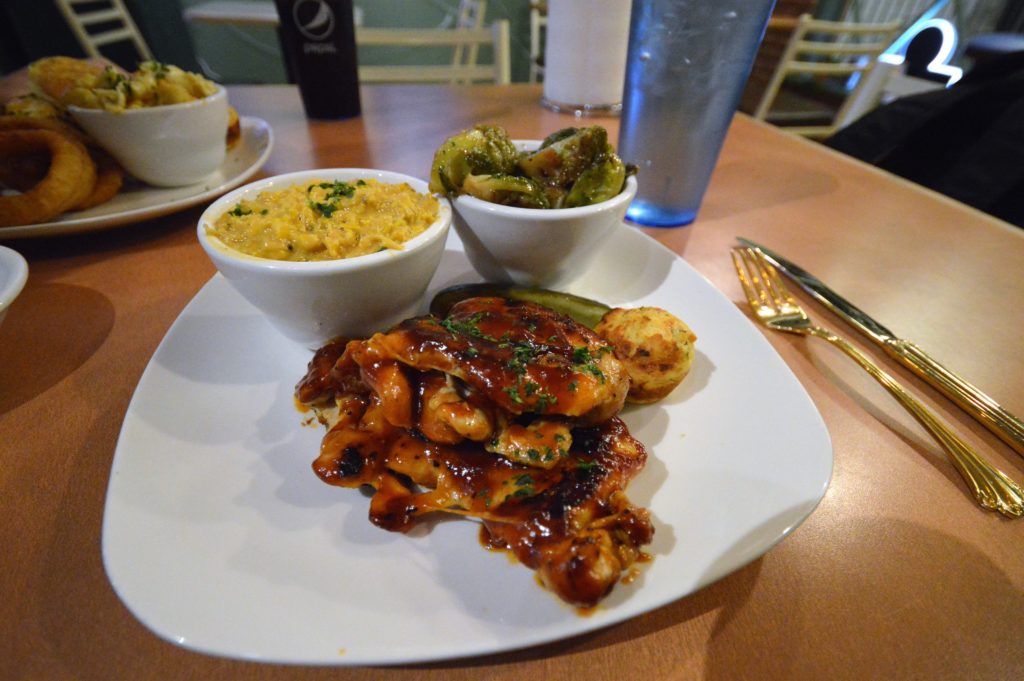 As soon as the door slides open, Plant To The Plate sends an air of individuality, amazing food, and most surprisingly, family.

“I really want it to be just like home. People coming together, eating good food,” said Jessica Selvage, co-owner of Plant To The Plate.

Hailing from Tennessee, the three-generation family has decided to settle down and call Fort Collins home. That place is Plant to the Plate, a restaurant across from Colorado State University. With family paintings hanging about and Halloween decorations taking up every nook and cranny, the restaurant makes a distinctive aesthetic for themselves.

“Don’t expect to get the corporate treatment, it’s gonna be like you came over to your grandparent’s house for dinner,” said Robert Murry, a co-owner of Plant To the Plate and Jessica’s husband.

The location is no stranger to students: A couple of months ago, it was home to Aloha Coffee & Grill. Now, 822 S. College Ave. is home to the southern-inspired, vegan and family-friendly restaurant. With a huge window looking out into CSU, the restaurant catches glimpses of the changing colors of the season and of students making their way to classes.

More than just the style it holds, it’s the familial spirit that makes Plant To The Plate run. Murry wants the restaurant to become a home away from home for those who dine there.

“You might have some kids running around, or you might hear some kind of commotion in the back of the kitchen, but you can believe it’s all for your benefit, and we’re doing it for the guest,” Murry said.

“I really want it to be just like home. People coming together, eating good food.” — Jessica Selvage, co-owner of Plant To The Plate

Their individuality isn’t only present in the way the restaurant is run, but also in their recipes. The recipes used at Plant To the Plate are the same recipes Murry’s mother and grandmother used, the homestyle cooking passed down through generations. But, Murry faced a unique challenge with the Southern-style recipes passed down through his family.

“In the south, your recipes just in general aren’t healthy,” Murry said. “I went vegetarian a couple years ago, so I had to alter some of my recipes and dishes. I discovered that I liked them better without meat.”

As the only vegetarian in his family, Murry had to experiment with food in ways he wouldn’t have thought otherwise. Before opening the restaurant, Murry might have said every dish was their specialty. But now the public has voted, and it’s chosen their favorites.

“Pie and Chicken, that’s a good way to say it,” Murry said through chuckles.

The fried chicken has been a huge success and is setting the pace to become their staple dish along with fried catfish. For vegan options, the pot pie has become one of the most popular plates. Every dish is handmade and produced by the family.

“My mom and my daughter come in and do all the baked goods, homemade from scratch,” Murry said.

Handcrafted dishes and hospitality are the norm for this family restaurant, but so is ambition.

“At a very young age I knew I wanted to do something big, something great,” Murry said. After having kids, that feeling was amplified, and he felt compelled to build something that he could pass on to his three children, aged 13 to 16.

“At a very young age I knew I wanted to do something big, something great.” — Robert Murry, co-owner of Plant To the Plate

At the end of the day, Plant to the Plate is more than a place with quirky decorations and artwork, serving vegetarian and southern options. It is about hospitality, serving others, and getting smiles out of people that make it all worth it for the Murrys. Murry’s wife and family believe that, which is why they offer coffee, water, or anything within their reach to anyone, customer or not.

“I hope it becomes kind of like a rock, or a real asset, or a fundamental part of Fort Collins,” Murry said.

Murry fully expresses his love for his family and food, and that same love shows up in the restaurant.