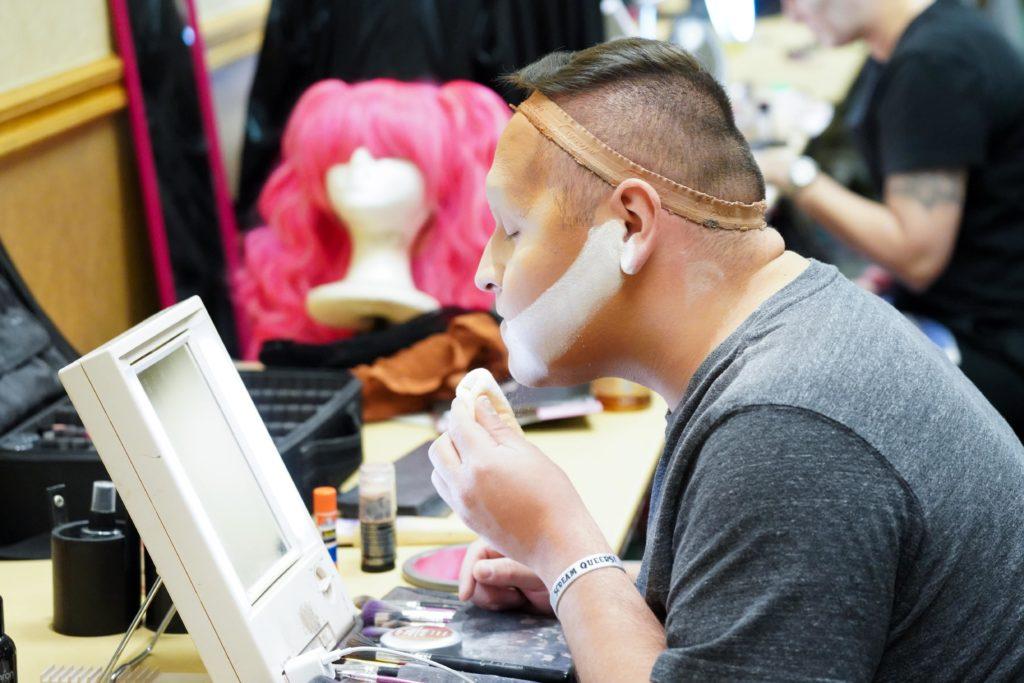 Mirrors line the wall as performers focus on getting just the right look for the big show; around a thousand people were expected to attend the event, which happens every semester and serves as a fundraiser for the Pride Resource Center. Underneath the makeup lies a hidden truth about this seemingly glamorous lifestyle of drag entertainers.

Evelyn Evermoore, co-host of the 2019 show, is known for sewing every stitch of their costumes, many of which were showcased through multiple outfit changes throughout the night. Evermoore’s self-made aesthetic relies on unique costumes, wig styling and makeup.

“Drag looks so glamorous, like I’ll be in a sequin gown with giant hair and jewelry, but the sequins on the inside are cutting me up. I’m usually corseted which means I can’t breathe,” Evermoore said. “The heels hurt, the wig is on too tight. Drag is pain.”

Awarded Distinguished Costume Designer in addition to Comedic Entertainer of 2018, Evermoore entertains in drag for a living but participates in CSU’s Drag Show for free. Evermoore is one of many professional drag performers who volunteer their time and energy to the CSU Drag Show.

“It’s worth it every time to feel the love from the audience and get up on stage and just have this vulnerable moment,” Evermoore said. “This means something to me, and watching people relate and connect to it is worth it every single time.”

Mira Pusateri, the producer of the show, admits to working up to 40 hours per week leading up to the event. On top of being a full-time horticulture major, Pusateri handles the ballroom reservation, funding requests and emails, among countless other tasks to make the show happen.

“If I don’t do it, who else will?” Pusateri said. “There’s been times where I’ll do drag show stuff rather than homework, which in the end can bite me in the butt a bit. But anything to make this show happen.”

As the first female producer of the CSU Drag Show, Pusateri has a drive for activism. The Los Angeles-native grew up in a supportive gay community, and the move to Fort Collins proved to be a stark contrast.

“I came from Los Angeles. It’s super gay there, so gay,” Pusateri said. “And then I come here and I stand out when I used to not. My beliefs are extreme when it used to not be … When we advertise the drag show, there are people who scowl and are in disgust.”

For Pusateri, the drag show is a way to increase queer representation in Fort Collins and to raise funds for the Pride Resource Center scholarship, which supports students in the LGBTQ community. Without the CSU Drag Show, there wouldn’t be a scholarship.

“A lot of the people I know within the Pride Resource Center are alienated from their family and are in financial struggle,” Pusateri said. “Sometimes, their parents will not pay for college for them because they’re transgender. And that’s exactly where that scholarship comes into play and why it’s important.”

The Halloween-themed show compelled audience members to cheer and throw dollar bills onto the stage during performances, the customary way to show appreciation as an audience member at drag shows. The money collected from the night would typically be given to the drag entertainers, but instead, all proceeds go to the scholarship fund.

It’s worth it every time to feel the love from the audience and get up on stage and just have this vulnerable moment.” — Evelyn Evermoore, drag performer and co-host of the Fall 2019 CSU Drag Show

Come the day of the show, the hard work that goes on behind the scenes pays off. Attendees can expect a fun, entertaining night full of representation.

The CSU Drag Show is also unique because the performers have the opportunity to make an impact through education. The “Ask A L’Everwhor” segment of the show provides students with a chance to ask the professional queens any question at all, ranging from silliness to seriousness about what it’s like to be part of the LGBTQ community.

“Taking the time to use our platform to educate people, talk about issues that are going on with our community, and creating change is one of the most important things that we do as entertainers and community leaders,” Evermoore said.

Evermoore embodies the idea that drag is more about the idea of “men in wigs,” and drag entertainers can be leaders in the LGBTQ+ community making an impact.

For Pusateri on the night of the show, their role as producer is transformed into a performer. Pusateri’s drag character “Auntie Depressant” was adored by the crowd.

“If I can organize a whole ass drag show, what can’t I do?” Pusateri said. “For me, it just seems like an everyday thing. I’m honestly so proud to be a part of it.”