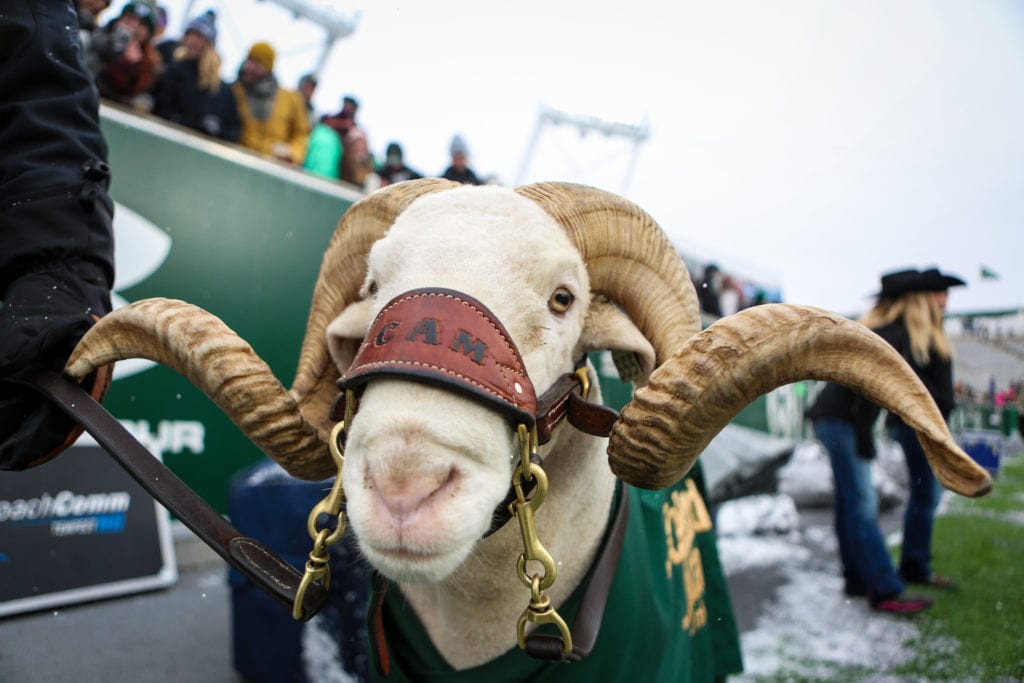 Dating back to the 1930s, live animal mascots have been owned by universities and professional sports teams alike. Animal mascots can send a message to rivals and fire up the crowd – even if it means using an electric prod to make “Mike the Tiger,” Louisiana State University’s prized cat, roar in a cage as he is paraded around the football field on game days.

“Even in the best circumstances, subjecting animals to a busy university environment and forcing them into close proximity to crowds of people day in and day out is stressful and cruel,” said People for the Ethical Treatment of Animals in a statement on their website.

Colorado State University is the keeper of the famous “CAM the Ram,” a cute fellow who is actually a breed of sheep known as Rambouillet. There are multiple CAMs ready to run on the field at any given moment and they are chosen through a rigorous program.

Each CAM is then trained to get used to people and the loud chaotic nature of campus events. The trained Ram Handlers look for signs that Cam may be stressed, which can include flaring of nostrils, rapid head movements and other small behavioral cues.

“Sometimes when animals are fearful of something, they’ll look from one place to another really fast because they don’t know what to focus on,” Herman said.

“By the time it gets to game day, it doesn’t even phase him, because he’s already been trained that nothing bad is going to happen to him with all of the noise,” Herman said.

But animal activists groups like PETA argue that the animals don’t just “get used” to the noise and confusion, and animals have no place out on the field when human mascots can do a better job of energizing the crowd.

One human mascot for the NFL’s New England Patriots said, “While live animals must be tucked away in a corner of a stadium and are rarely seen during the game, a human mascot in costume can be visible, active and instrumental during the entire event.”

The University of Colorado, Boulder has a live buffalo mascot named “Ralphie,” who participates in the tradition of running up to 25 miles per hour around the field to lead the football team into the stadium and rile up the crowd.

“We listen to what Ralphie needs. If Ralphie does not feel like running, the Program Manager will cancel the run,” said CU Boulder in a statement on their official website.

It is unclear, however, how the handling team would be able to tell if Ralphie didn’t “feel” like running. Important decisions about retirement and whether an animal is fit to continue the pressure-filled lifestyle of being a mascot are made by a combination of the university handling teams and the animal’s veterinarians.

“Older animals, just like people, can get arthritis, so that might be a consideration if they are that old,” Herman said.

As fans anticipate the 2019 football season, animal mascots are sure to come along with the fanfare and excitement, the continuation of a tradition that will not go down without a fight.

Editors Note: This story has been updated to reflect that Cam the Ram is not intentionally subjected to stress and loud music to desensitize him.