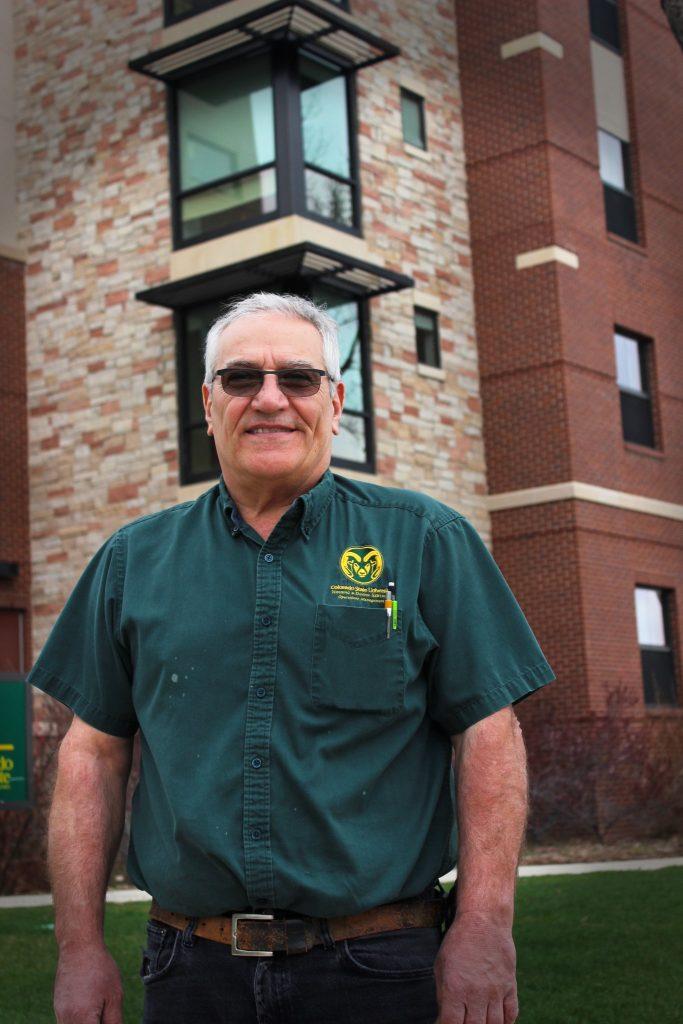 When walking through any of the academic or residential buildings at Colorado State University, there are many things that one might take for granted: the trash cans have been emptied, the floors have been cleaned and the bathrooms have been sanitized and stocked.

While people would certainly notice if these duties went undone, they may not often think about the individuals who work behind the scenes every day to maintain the buildings on campus.

Hairik Honarchian has worked as a custodian through Housing and Dining Services at Colorado State University for over two years, but his true career goals lie elsewhere. In addition to working full time, Honarchian is working toward earning a master’s degree in agriculture.

“I am currently researching the role of home gardens in food security and the overall food system,” Honarchian said. “I have had this long interest in growing food and sustainability and those kinds of issues.”

Through a program called Employee Study Privilege, eligible employees may register for up to nine credit courses per year free of charge.

“I didn’t have the intention of going back to school because it’s not very cheap to do it,” Honarchian said. “It makes me appreciate the opportunities here. I think it’s a great thing for anybody who works to improve themselves.”

In order to enroll in classes, employees must fill out a form and have their supervisor approve and sign it before submitting it to the Registrar’s Office. Honarchian said the supervisors and professors are very supportive and flexible.

“Sometimes your classes might interfere with the work hours,” Honarchian said. “They have suggested that if there is a course that you really need to take, then they might work with me to maybe switch my schedule around.”

Dr. Brett Kirch is the professor teaching the graduate-level agriculture class that Honarchian is taking this semester.

“He is an extremely good student and he works very hard,” Kirch said. “I understand that he’s got a full-time job. For nontraditional students who are dealing with that type of thing, I give some leeway. Life happens.”

Kirch said he thinks nontraditional students have a lot of positive characteristics to offer.

“As we get older, after we’ve been out in the world for a bit, the maturity and the experience appears to make (nontraditional) students a little bit more focused,” Kirch said. “For a lot of students, we’re here to discover what we want to do and who we are, but nontraditional students generally have a little better handle in that respect.”

For Honarchian, there were many life experiences that got him where he is today. After the Iranian Revolution in 1979, he emigrated to the United States as a student. Honarchian was 23 years old at the time.

“I didn’t have much support,” Honarchian said. “My father passed away a year after I came here, and so I had to work and put myself through school.”

After the death of his father, Honarchian’s mother and three of his four siblings also immigrated to the United States in order to join him. Honarchian had to balance work and school with supporting his family.

“Being the oldest son, I was obligated to sort of take the role of the father,” Honarchian said. “My family was scattered around the globe and we were trying to get them all here.”

As an immigrant, Honarchian was also faced with the challenge of a language barrier.

“When I came to the U.S., I wasn’t speaking a word of English,” Honarchian said.

Despite these obstacles, Honarchian earned his undergraduate degree in computer science at Brooklyn College of the City University of New York in 1989. Later, he owned his own business in California, but moved to Colorado when his business encountered hard times.

“When I came to the U.S., I wasn’t speaking a word of English.” — Hairik Honarchian

Although the challenges he faces today are different, Honarchian still struggles to balance classes with a full-time job.

“This position doesn’t pay you that much for you to make a living without working full time,” Honarchian said. “You need to work 40 hours, and if you’re working that many hours, then taking nine units is reasonable to some degree. But if you are at the graduate level, things get a bit difficult.”

For Honarchian, returning to school was particularly challenging because of his age.

“I’m well past the time that normally people would be going to school, and I know that my brain was a whole lot sharper when I was younger,” Honarchian said. “I mean, I put in twice as much effort as I had to put in when I was younger.”

Honarchian urges students to appreciate the opportunity to be a student full time.

“I think it’s a big, big, big advantage to be well-off — to be able to attend school full time — and not have to worry about expenses,” Honarchian said. “Carrying 12 or 15 units is not that easy, but if you don’t have obligations, then you have all the things that make it possible for you to excel.”

Additionally, Honarchian encourages the other members of the custodial staff to take courses through the Employee Privilege Study program.

“It breaks my heart that we have all these folks who work here and not many people seem to want to take advantage of this great opportunity,” Honarchian said. “School is not cheap, and I understand people have responsibilities, but just take a few courses here and there and by the time you realize it, years have passed and, next thing you know, you have an education.”

“It has helped me to get into something that I really had an interest in,” Honarchian said. “I really appreciate the opportunity. If I graduate, then it’s thanks to this program.”

Honarchian has already completed 1/3 of the coursework required to earn his degree and estimates that it will take an additional two years.

When looking toward the future, Honarchian hopes to find a research job in his field so that he only has to work part time as a custodian.

“I have big plans. I am very passionate about what I do.”