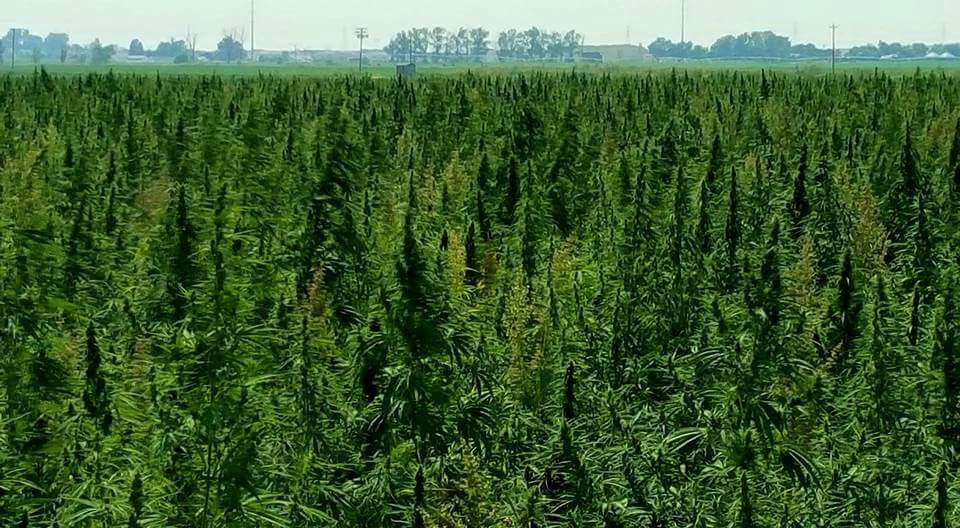 With its environmentally-friendly properties and wide range of uses, industrial hemp or Cannabis sativa L. may be the key to the future of sustainable agriculture.

Mike Sullivan is the founder of Hemp Farm Colorado, an 80-acre hemp farm near Brighton, Colorado. He had previously grown marijuana for 20 years, but switched to hemp in 2014 after Colorado passed Amendment 64.

“We’re kind of in a little niche market in Colorado, but there’s definitely interest,” Sullivan said. “It’s a work in progress, my first year I grew 7 acres and I was the largest in the state.”

The hemp industry in Colorado has developed significantly since it was established in 2014. According to the Colorado Department of Agriculture, almost 9,000 acres of land were registered to grow industrial hemp in 2016. That’s a 145 percent increase over two years.

For Sullivan, switching from growing marijuana to hemp was a no-brainer. As opposed to more traditional crops like corn and cotton, hemp is much more efficient and eco-friendly.

“Hemp takes half as much water as corn and other agricultural products,” Sullivan said. “It’s carbon neutral or carbon positive, meaning it puts more nutrients back into the soil than it takes out. It also breathes carbon dioxide and expels oxygen.”

Additionally, hemp does not require the use of herbicides or pesticides.

“The acres are thick enough in density of plants that it deters pests and competing weeds,” Sullivan explained. He said hemp is typically grown anywhere between 250,000 to 500,00 plants per acre.

According to Sullivan, the climate in Colorado is especially conducive for growing hemp.

“It’s so dry here there’s no humidity which is important when there are so many plants per acre,” he said. “Hemp also has a high tolerance for cold, and the long growing season allows for two harvests per year.”

Dr. Anne Marie Merline is an honors instructor at Colorado State University who teaches her students about the sustainable benefits of hemp in her seminar focusing on sustainability and consumerism.

“It seems that a lot of students think that hemp is marijuana,” Merline said. “They’ve grown up in a culture where marijuana is illegal, and because hemp looks the same they think it is also illegal.”

Merline attempts to clarify some of those misconceptions by teaching her students about the many sustainable properties of hemp.

“I have a week called ‘Hemp Week,’ where I try to show the students how it is a more sustainable material than some of the materials that we use now,” Merline said. “It is less impactful on the environment as far as what it takes out of the soil and gives back to the soil.”

Merline also teaches her students about the many products that can be made from hemp material.

“It just has so many applications,” she said. “Hemp plants take about three months to grow, and we could use that for paper. Paper trees take decades to grow, so there’s a faster return. Cotton is very water-intensive, it takes a lot of fertilizers and pesticides, and hemp could easily replace our cotton products.”

Sullivan also elaborated on some of the many uses the different parts of the hemp plant.

There are also many hemp products that are made for human consumption. Sullivan’s brand Colorado Gold currently sells three lines of consumable hemp products: hemp hearts, hemp seeds, and hemp flour. Hemp is high in protein and healthy fatty acids such as Omega-3.

“You can just do so many more things with hemp compared to corn or soy beans,” Sullivan said. “With the seed, you can use it for cooking as a gluten-free flour substitute. You can get hemp hearts and grind them up with some water for dairy-free hemp milk. Hemp seed oil can also be made into many cosmetic and edible products.”

Despite, its agricultural benefits and product versatility, growing industrial hemp remains federally illegal under the Controlled Substance Act of 1970. This legislation classifies all cannabis varieties—including hemp—as a controlled substance along with drugs such as heroin, LSD, and ecstasy.

“In the federal government, [growing hemp] is illegal but they’re allowing us to do it as long as we follow the state rules and regulations,” Sullivan said. “The state department of Agriculture requires you to register your field. That’s a way to keep the industry doing what they say they’re doing so someone’s not trying to grow a field of marijuana saying it’s hemp.”

Before it was made illegal, hemp was a staple in American agriculture and played an important role in the nation’s history. It was used to make rigging and canvas sails on military vessels, pioneers used hemp canvas to cover their wagons, and the first drafts of the Declaration of Independence were written on hemp paper.

During World War II, the U.S. government ran the “Hemp for Victory” campaign which encouraged American farmers to grow hemp in order to support the war effort.

After the Mexican Revolution, however, the U.S. government and media demonized marijuana as a dangerous drug. In 1937, the Marijuana Tax Act placed strict regulations on the cultivation and sale of all cannabis strains—including hemp.

Hemp’s association with marijuana has perpetuated many misconceptions about the crop and stigmas surrounding the industry today.

While it is still a strain of the Cannabis genus, industrial hemp strains actually contain very small amounts of Tetrahydrocannabinol or THC. As a result, even if one tried to smoke hemp it would not have psychoactive effects or produce the “high” experienced when smoking marijuana.

“We have to stay under three-tenths of a percent,” Sullivan said. “For comparison, the strains we have in Colorado that people smoke are anywhere from 20 to 25 percent THC.”

Hemp farmers must be very precise when deciding when to harvest their fields in order to stay under the legal level.

“If you let it go too far past the cycle date of the strain, it’s most likely going to be over your .3 percent and the state will take it away and make us destroy it,” Sullivan said.

There are some ways to differentiate between hemp and marijuana in the growing process.

Perhaps in part due to the stigma, there are still many obstacles in place that hinder the hemp industry in the United States. According to Sullivan, one of these obstacles is the lack of infrastructure that can process the raw hemp material into products.

“It’s actually kind of tough on farmers because they grow it and there’s nowhere for them to take it,” he said. “They’ll be a lot more benefits to farmers once there’s infrastructure to produce something from their raw material. Now that we’re in our third year, we hope to be processing hemp seed by the end of this harvest season to be able to buy from farmers.”

“I think when people realize what a versatile product it is, it could help change the environmental state of the earth.” — Anne Marie Merline, honors instructor at Colorado State University

These restrictions make it difficult for American growers to participate in the global hemp market.

“In Canada you can only buy your growing seed from the government, and it’s less than $1 a pound, so it makes it very cheap to farm your acres,” Sullivan said. “Here in the U.S., we’re selling our seed for around $5 a pound.”

Disparity in pricing hinders the U.S. from competing with other international companies.

“The rest of the industry in the world comes back to us and says ‘we’d love for you to be part of the industry, you just have to match everyone else’s prices’ and right now we can’t compete with that,” Sullivan said.

Instead, the U.S. relies on importing hemp products from other countries where the hemp industry is already well-developed and—in some cases—subsidized by the government.

“We import a lot of hemp and hemp products into the U.S. from other countries such as the U.K., Canada, and China,” Merline said.

Many in the industry agree that legalizing industrial hemp in the United States would have significant economic benefits.

“If we were to grow it in the U.S. and use it for products, it could regenerate the farming sector in the U.S.,” Merline said. “It could add to the economy because we’re adding U.S.-grown-and-made goods into the U.S. economy.”

Although it is not federally legal yet, the U.S. does seem to be slowly moving toward more lenient polices regarding hemp. President Obama signed the Agricultural Act of 2014, also known as the 2014 Farm Bill. This legislation allowed universities and state departments of agriculture to grow industrial hemp for research purposes, with the requirement that it must also be legal under that state’s laws.

“I always think that universities can be and should be the forerunner in something like this,” Merline said. “We have the research facilities for it, we have an agricultural program, it seems like it’s a perfect fit and right in line with the green university.”

Events such as the NoCo Hemp Expo also serves to educate people about hemp and promote its usage as an agricultural product. The fourth annual trade show and conference features speeches by industry-leaders, workshops, and booths all focused on hemp. The event took place on March 31 and April 1 at the Ranch Complex in Loveland, Colorado.

Sullivan said he is optimistic about the future of the hemp industry both in Colorado and nationwide.

“Hemp is going to be a leader in the agricultural community in Colorado and the nation,” Sullivan said. “But that will only happen if we can get our own American supply of hemp that is cheap enough and comparable to the rest of the hemp in the world.”

Merline is also hopeful that the American hemp industry will continue to grow and be successful.

“It’s going to be a growth process for us as an economy,” she said “But I think when people realize what a versatile product it is, it could help change the environmental state of the earth. Maybe that’s a far-fetched dream, but we need to get past its stigma and the rest will follow.”