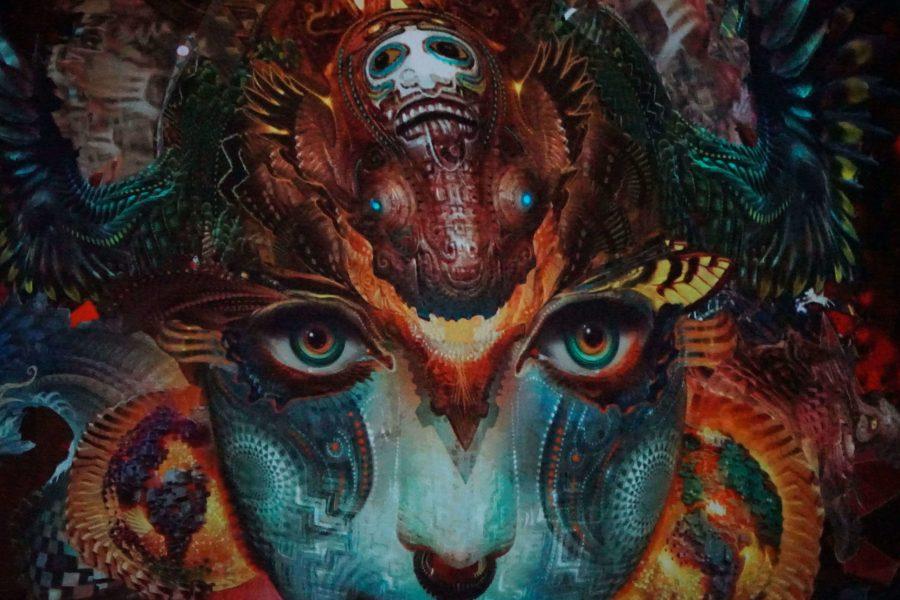 Art from the immersive 3D show "Samskara" by Android Jones at the Fort Collins Museum of Discovery inside the Otterbox Digital Dome Theater on Friday March 1st. (Skyler Pradhan | Collegian)

Being enveloped by 360 degrees of stimulating visuals illustrating a journey through consciousness might make someone need to look up at the night sky and take a deep breath. But no one ever said the path to enlightenment would be easy.

Android Jones, a visual artist creating work through electronic mediums, helped create SAMSKARA, which is inspired by ancient Vedic tales and Sanskrit mantras. The show is also heavily inspired by spirituality and altered states of consciousness. The journey begins in the bardos (the transitional state between death and rebirth). Then the audience travels through conflict and destruction before finally ending at hope and enlightenment.

“For me, being human is a mysterious thing,” Jones said. “I’ve spent my life trying to understand and explore what consciousness is, and making art is my favorite way of exercising the exploration of what consciousness means to me.”
“It was kind of hard for me to watch the darker parts, even though it was still beautiful. Maybe that’s the lesson in it: that there’s beauty in (life), still.” – Rio Bishop, audience member
The piece, which premiered at the OtterBox Digital Dome Theater March 1, showed gyrating mandalas folding in on themselves, seemingly taking the viewer with them. Galaxies are morphed into human portraits and hauntingly beautiful music puts you in a trance as geometric shapes swam toward you in a sea of 3D stars. The audience traveled into the heart of fire and destruction just to be taken back out and delivered back into a eutopia of living foliage and transcendent nature.

“The visuals really took me on a journey starting with the bright, happy beginning; then transforming into the dark parts of the world,” said Austin Millis, a health and human sciences student. “It was such an intense feeling, not only to experience in the moment, but to think about afterwards.”

Samskara holds significance in Indian philosophy as being defined as mental impressions or psychological imprints. In Hindu religion, however, it is the basis for the development of karma theory. Jones said the reason this show works as an immersive experience is because it hints at exploration of external reality as well as internal consciousness.

“Planetariums communicate information of exploring the cosmos and constellations,” Jones said. “From a Vedic perspective, there’s a universe outside of ourselves, but also an infinite universe inside ourselves. The inner universe is just as valuable and important to explore as the external one.”

Although he can’t explain why he makes the art, Jones says it’s something that brings him closer to the ‘ultimate truth.’ He says art is an exercise in expressing things that he finds beautiful or valuable in an externalized form. His work, which he describes as “electro-mineralism” allows him to display his consciousness into an objective form. Yet the crux of his work is encouraging people to have subjective experiences with it.

“A lot of artists define themselves based off the mediums they use, but I wasn’t satisfied with the colloquial terms of ‘digital painter,’” Jones said. “I looked at the mediums I was using and broke it down: I was using computers and monitors that could be dissected into electricity. If you broke it down further, it’s basically minerals.”

“The show definitely had some input on where humanity is going,” audience member, Rio Bishop said. “There was some light and then dark, but it ended by bringing the journey back to the light. It was kind of hard for me to watch the darker parts, even though it was still beautiful. Maybe that’s the lesson in it: that there’s beauty in (life), still.”

The visuals were psychedelic and produced a subtle out-of-body experience. At one point it felt like there was no barrier between the audience and what they were watching.