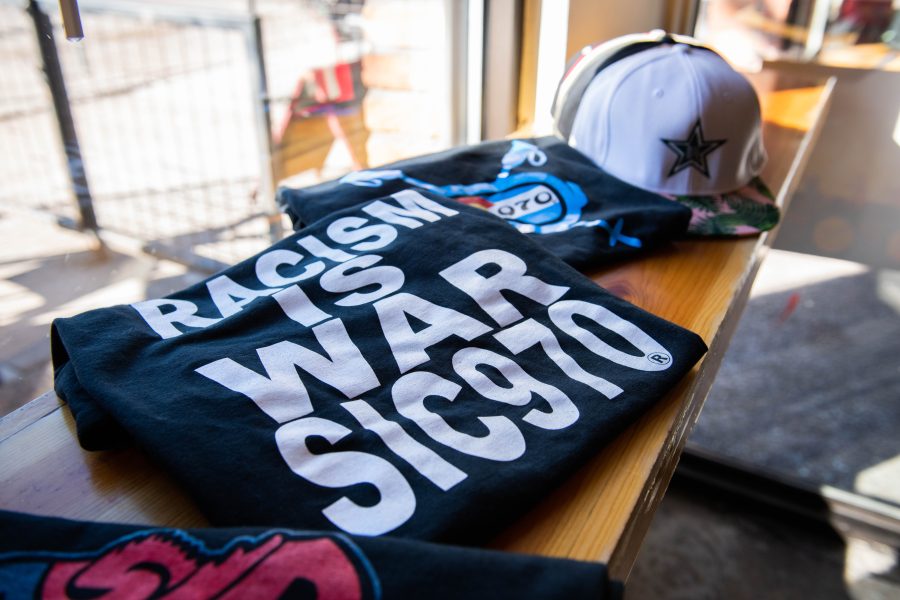 Apparel company Sic970 is unique to locals and important to all.

With messaging that focuses on social justice paired with familiar Colorado emblems, the Fort Collins-based company aims to empower those who wear its products.

Founder William Bell graduated from Colorado State University in the late 1990s with a degree in liberal arts. In 2012, Bell started his company, an idea he had sparked years before.

Nine years later and Bell’s company is alive and well. Available to purchase in other local businesses like The Colorado Room, Kind Creations and from Bell himself, his main products include flat-bill hats, baseball caps, beanies and T-shirts.

His products feature his trademarked Sic970 logo, the Colorado flag symbol and phrases inspired by equality movements and the local area.

All Sic970 products are made locally, and Bell purposefully cultivates relationships with other small businesses — many with 10 or fewer employees — to print silk screens on shirts and stitch hats.

Bell’s art is an extension of himself and his lived experiences.

Every piece of Sic970 apparel sold starts as a thread of a concept in his head and ends as a positive message for the world to see and wear.

“I might have an idea and I start scribbling it on a piece of paper,” Bell says. “I could be sitting in my house, … I could be walking, and I might think about … ‘OK, this is a great idea,’ and I’ll start developing that through the thought process in my mind.”

Bell says much of his inspiration comes from his life growing up in Northern Colorado with his mom and two sisters. After seeing what they go through, part of his focus with his company is to empower women and girls.

One of his design sets is called “Beauty Is.” and shows a butterfly next to those words to symbolize that everyone is special in their own way, Bell says.

Another series of his is on anti-racism awareness, featuring four different designs. One of the designs Bell created is a concept he calls “racism must die.” Bell believes that if the ideology of racism dies, there would not be individual groups being racist because they would have nothing to inspire them.

“When I put out a design, there’s always a purpose and meaning behind it,” Bell says. “I want people to think, I’m trying to bring people together… All human beings have the same needs and a lot of things about racism and prejudice is lack of knowledge, so I do stuff to inspire people, especially women and girls.”

Bell says some of his other inspiration comes from his time at CSU. As a Black man, Bell says he was “probably in the 1% of people of color” on campus.

“There was a small percent of people of color there at CSU, and just being there with different people, learning different things, we all came together [and] we learned a lot,” Bell says.

Touching on how grateful he is to the people who helped him, from professors to friends to strangers, Bell says he will never forget the opportunities he had at CSU.

“Some of the best times of my life were at CSU; I learned so much,” Bell says. “I think it shaped me into the person I am and helped me motivate myself to start a company.”

Bell’s bottom line is that he tries to make a difference through his company, both locally and beyond.

Story by Serena Bettis. This article is part of Best of CSU 2020.