A Peaceful World Begins at the Base: Ourselves 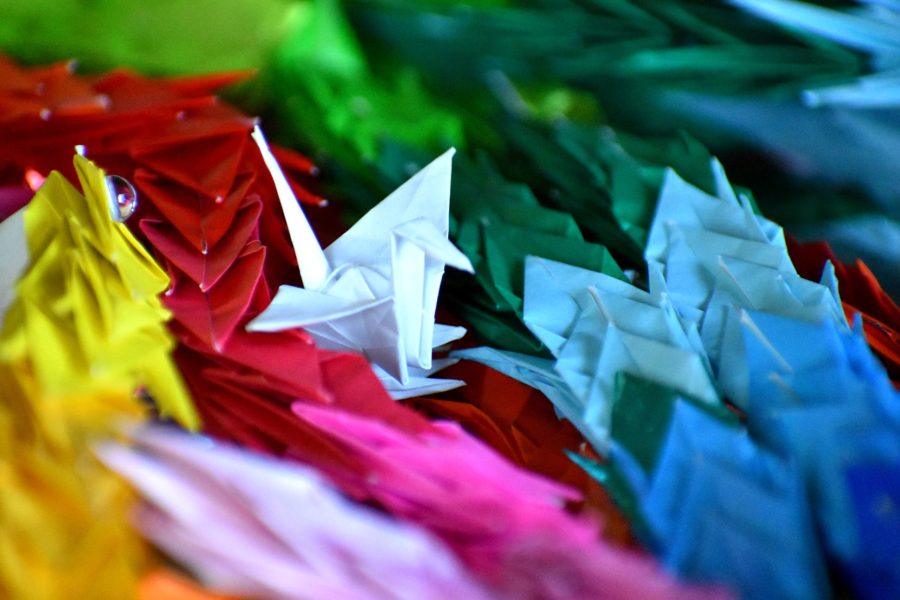 Ghandi doesn’t have to be written on our name tags in order to make a difference. We have the opportunity to initiate peace. We have our own actions and words.

Our world is a complicated place surrounded by accustomed violence. Vietnam veteran Dennis McQuade said in the book Long Shadows that “because there is so much death, everybody has to excuse it.” People are forced to lower their morality to fit the sanity of reality.

Healthy discussions that consist of everyone’s perspectives help align ethical actions and values. Study groups in college are a great place to practice valuing each and every group member’s opinions. Getting caught in culture separation is detrimental to any community because it disallows the inclusion of everyone.
When we take initiative to see other people’s perspectives then we can make the peaceful path more crowded.
Why is finding peace ‘a path less taken’ and how can we make that path more trafficked?

I think a lot of people underestimate the power of peace in our daily lives. Holding the door open for someone, avoiding putting labels onto people, complimenting someone’s awesome kicks, or pausing to think before spilling out a heated argument are all examples of simple, yet impactful actions. When we take initiative to see other people’s perspectives then we can make the peaceful path more crowded.

Instead of internalizing anger and continuing cycles of violence, Japanese Greenwich Day Grade School makes products of peace. Their little fingers are eagerly at work folding origami pieces of paper into cranes. Crane after crane, the children create symbols of peace.

The grade school eventually makes their way over to the Hiroshima Memorial, the site of nuclear destruction from the bomb dropped in 1945 during World War II. One by one, the children lay their strings of paper cranes across the memorial. Love embodies the heartbreaking loss of the past with a gesture of renewed hope.

A twelve year-old girl Sadako Sasaki inspired this tradition after she was diagnosed with radiation-induced leukemia following the nuclear bomb dropped in her city Hiroshima. Her goal was to fold 1000 paper cranes because of a traditional Japanese myth saying one would get a wish after the 1000th paper crane was folded.
Having mutual respect for people with various cultures makes it easier to convert misunderstanding into understanding.
Heartbreakingly, death closed her eyes almost a year after her diagnosis with only 644 finished. Friends and family folded the rest and buried the 1000 with her body.

“Her death gave us a big goal. Small peace is so important with compassion and delicacy it will become big like a ripple effect,” Sadako’s brother Masahiro said, in an Huffington Post article. He and his father started the organization called Sadako Legacy in order to keep spreading peace.

Their goal “is to make sure that humans never experience [nuclear bombs] again,” Masahiro Sasaki said. He travels around the world as a keynote speaker for peace conferences. After he is done speaking, there is often a music performance that demonstrates the power of unification.

Music can be understood by everyone around the world. Sadako Legacy utilizes this global connection to build peace. Fort Collins also provides a lot of opportunities for the community to gather in music. Make sure to take advantage of local venues like the Aggie Theatre or Avogadro’s Number. Everyone’s differences all blend together because it’s all about listening and enjoying the music.

Some other ways to be a part of peacekeeping include smiling at others as you pass them, writing a card, apologizing, thanking others for their kind gestures, or taking the time to listen intently to someone you maybe don’t know as well. These are all products of peace just like the paper cranes.
Inner peace initiates these external products of peace.
Colorado State University Professor Timpson from the Education Department said that a good way to be an advocate for peace is “to pay attention to what’s happening on campus.” Then, he suggested “borrowing the crane example” and bringing it to reality on campus. “Especially with everything going on,” physical reminders of hope can be really powerful. Art is a vehicle to peacefully work through conflict.

Making an impact starts from the foundation and works its way up. Inner peace initiates these external products of peace. Timpson pointed out that “meditation replaces spontaneous anger.” If students are working through their problems before they build up too much, then flares of anger can be prevented.

How do Colorado State University students promote their inner peace?

Freshman English student Gracey Wood said that she tries “to keep [her] mind focused on the long term.” Humans want to snap their fingers and diffuse ugly or stressful situations, but next time try thinking about taking things one step at a time like Wood does.

Having a strong base of inner peace depletes “the need to offensively defend my own beliefs,” says Wood. Understanding each other’s perspectives helps diffuse external escalating situations. “Recognizing that we all see life differently” is really important Wood said. Exchanging differing opinions is healthy, but shoving them down throats is not.

Having mutual respect for people with various cultures makes it easier to convert misunderstanding into understanding. Even though we all vary in opinions, we can erase tense boundaries without the presence of violence if we understand each other’s views.

Sadako Sasaki somehow figured this all out in her short life. She believed in the crane’s ability to sprinkle peace wherever it flies.

She did not give in to the cycle of violence and revenge. Instead, her legacy endorses global citizenship. The world may seem big, but change has a ripple effect. Why do people keep a piggy bank? The coins add up. Your actions and words add up.

Think about what Ghandi once said, “nonviolence doesn’t mean being passive,” and it doesn’t mean being weak either. Peaceful gestures are mighty powerful and go a long way. One by one, we can make ‘the path less taken’ a busy highway.

Here’s to being a global citizen.