A Call to Protect our Muslim Neighbors 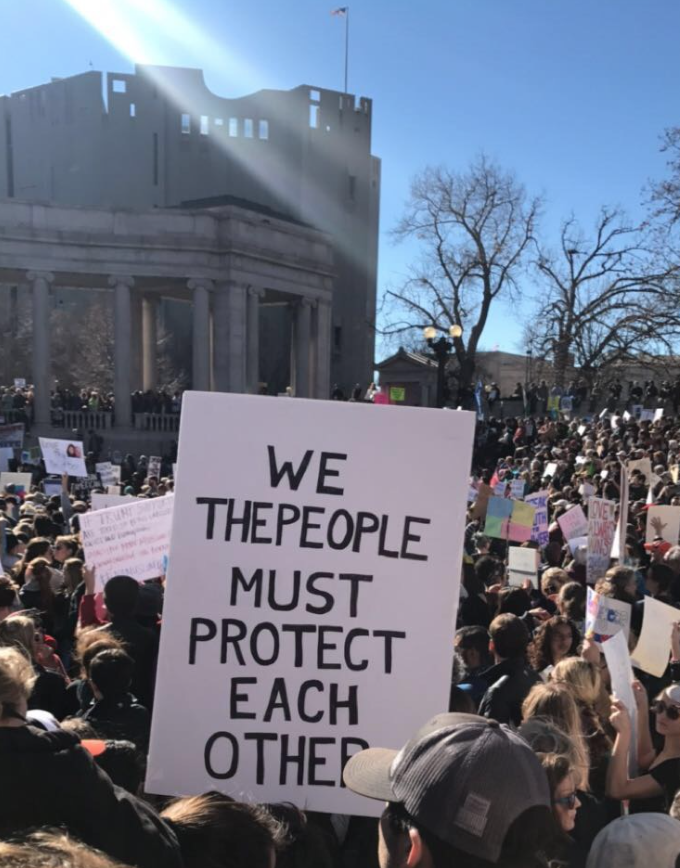 Basyouny's powerful words eminate with the hearts of those pursuing equal human rights for all. She held her sign high for the entire rally picturing a woman wearing an American flag Hijab that said, "We The People." Photo credit: Aliya Gorelick

Denver’s Civic Center Park hosted thousands of people on Saturday, Feb. 4, 2017. The park’s Greek Amphitheater was crowded with people holding signs above their heads until their arms visibly shook. Some signs read: “My Home is Your Home,” “Co-resist” and “You Belong, Stay Strong.”

The president’s recent executive order sought to ban entry from seven majority-Muslim countries into the United States. These countries include Iran, Iraq, Libya, Somalia, Sudan, Syria and Yemen. Federal Judge James Robart ruled Trump’s travel bans as “unconstitutional”, his ruling has been appealed. People with visas that had been revoked now, at least temporarily, have the right to have them reinstated. The Department of Homeland Security has halted enforcement of the travel ban.

The First Amendment in the U.S. Constitution states, “Congress shall make no law respecting an establishment of religion, or prohibiting the free exercise thereof.”

General uncertainty over the legal status of the travel ban has given rise to social movements and rallies uniting people against discrimination of Muslims in America.

Islamophobia is the “unfounded hostility towards Muslims and therefore fear and dislike of all or most Muslims,” as defined by the Center for Race & Gender at the University of California, Berkeley.

The “Protect Our Muslim Neighbor” rally showed the Muslim community in Denver, and all around America, that Coloradans will not stand idly by in the face of discrimination. Numerous Muslim women wore a hijab and carried signs advocating their rights as human beings. Powerful signs showed a Muslim woman wrapped in an American flag Hijab reading, “We the people.”
“It is amazing to show that we are all in unity. We are here to support each other and the refugees. I am very emotional.” — Sherin Basyouny

Sherin Basyouny stood proud with her daughter, Menna Lotfy, by her side. The two Muslim women smiled as the congregation roared in solidarity, with echoes of hope and peace rippling through the crowd. Sherin Basyouny said, “It is amazing to show that we are all in unity. We are here to support each other and the refugees. I am very emotional.”

Basyouny teared up as she expressed the meaning of this rally to not only herself, but to the entire Muslim community. Her daughter stood closely by her and smiled at her mother’s brave vulnerability. Basyouny said it is not everyday that someone inquired about her thoughts on current world politics regarding Muslims in America, but that she was very grateful to have her voice heard.

Numerous speakers at the rally sparked a sense of urgency among crowd goers and created a strong feeling of diverse unity. Speakers emphasized historical struggles that prominent religions have faced as a means of communicating the importance of banding together. A recurring message stressed that all people have seen or experienced some form of discrimination.

Lamine Demba Kane, current Muslim Student Association president at Colorado State University, said, “as a Muslim American who is of immigrant origins, I share the feeling of millions of Muslims around the world. A feeling of gratitude, care and welcoming when I see people stand for us across the country and especially in Fort Collins.” He is reminded that in this time it is important for him to focus on people who appreciate differences and celebrate similarities. These rallies help Kane maintain the belief that love will triumph those with oppressing minds and hearts.

“We are fighting for human rights, that is what everyone is here for,” Lotfy said. She said that she and her mother had attended many rallies previous to this one, each sparked a new sense of enthusiasm and optimism.

Tuesday, Feb. 7, 2017, there was a rally held in Old Town, Fort Collins, Colo. to continually express alliance with the Muslim community. Activism, love and tolerance are alive in the hearts of a new generation of protestors committed to show support for those targeted by immigration reforms.

Whitman, Elizabeth. “What Is Islamophobia? The History And Definition Of Anti-Muslim Discrimination In The US.” International Business Times. N.p., 09 Dec. 2015. Web. 07 Feb. 2017.