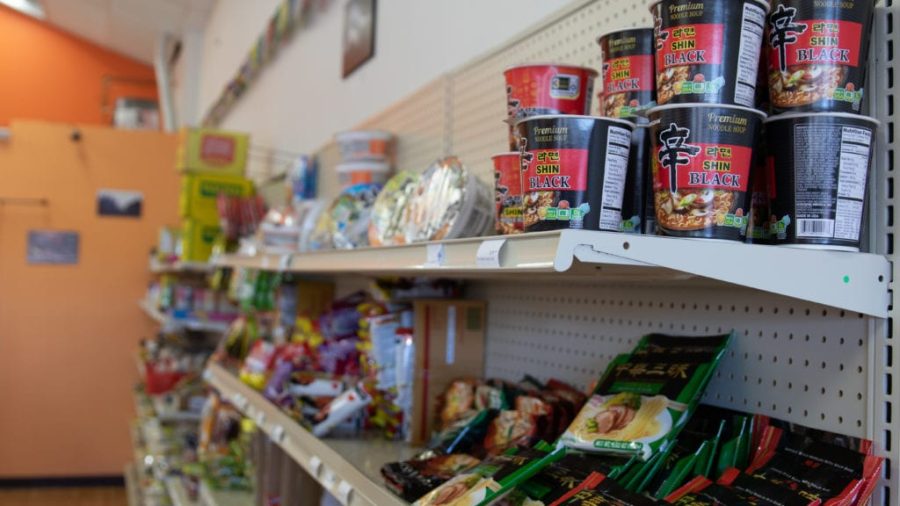 The Rams Bazaar holds foods and snacks from all over Asia. (Nathan Tran | Collegian)

The Rams Bazaar International Food Market has been in Fort Collins for over a year, and still remains an undiscovered gem to many locals.

Today, I finally made my way to this gold mine of undiscovered flavors that I had been planning on visiting for almost a year, and I was not disappointed.

While the Bazaar is a tiny store nestled right up against Jaws Sushi, it definitely packed a variety of merchandise into its small, well-lit space. The store carries ingredient from Asia, India, and Europe.

Aside from the exotic products that can be found, such as shrimp chips, vermicelli noodles and grape leaves; the Bazaar also offers up local favorites such as Pi Chai and jars of sauce from the Ethiopian restaurant Ras Ka on Laurel Street.

The ingredients found in the market can assist in making a variety of cuisines, from Korean and Thai to Middle Eastern and Greek, makes it the perfect destination for the adventurous cook.

To get the most out of the experience, I decided to head into the Bazaar with a recipe in hand. I decided that I wanted to make a curry, and was in need of coconut milk, tamarind paste, massaman curry paste and fish sauce. I found every ingredient.

Even if you aren’t much of a cook, the Bazaar has great finds. They carry instant miso soups, masala mixes and the ever-popular college staple of ramen, with the edition of phos and chow meins.

If you like the Bazaar’s Facebook page, you can even find a 5 percent off coupon for when you decide to try it for yourself. I know I’ll be headed back soon.

The Rams Bazaar is located at 1205 W Elizabeth St.